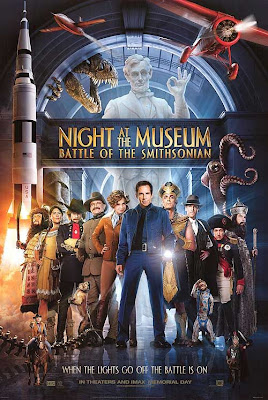 Memorial weekend is a time primarily held for big budget films that will pave the way for the summer blockbuster season usually lasting until late August. This weekend has been held by such movies as Pirates of the Caribbean: At World’s End, X-Men: Last Stand, and Indiana Jones and the Kingdom of the Crystal Skull, each grossing over $100 million for the weekend. The last time the box office did less than $100 million that weekend was 2005 with the animated Madagascar.

This past weekend, two relatively large films opened up: the follow up to 2006’s Night at the Museum, and the fourth film in the Terminator franchise, Terminator: Salvation. ‘Night’ ended up taking the weekend with an estimated $70 million over ‘Salvation’s $53 million. Though Terminator opened on Thursday and technically took in $67 million for the four days, the weekend itself was won by the Ben Stiller vehicle. Though, Terminator losing wasn’t much of a surprise if you read our review here on the site.

No word on what this could mean for the box office and the rest of the summer, seeing as how there are plenty of big budget films on the way, and the highest grossing weekend this year goes to Wolverine at $85 million. Does this mean we could see a weak financial year for studios? Have people run out of money after seeing Dark Knight 36 times in the theater? Only time will tell.