The Future is What you Write 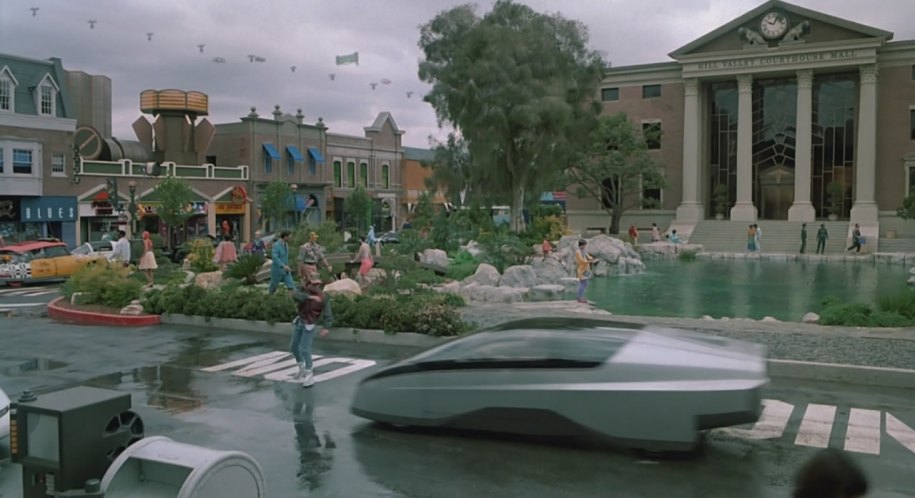 The future is bright. So bright in fact, that J.J. Abrams angled multiple reflections off of every surface imaginable in the darkness of space. Just how many suns were there? A Trek fan and a friend of mine pointed out that finally the future is catching up with the dreams geeks have had for decades. It seems the PADD, or (Personal Access Data Display) has been around since 60’s Trek and is now getting its time in the sun thanks to Mr. Jobs and his iPad.

I, however, didn’t grow up on Trek, I grew up on multiple viewings of Back to the Future Part II. I dreamed of the day when I too would glide on a hover-board, wear flashy baseball caps, and watch TV on a nifty visor. To that end, some of the predictions have come true. As for the rest…well I’ll meet you at Café 80’s on October 21st, 2015.

“Where we’re going we don’t need roads.” Um, yeah we do. We need a lot more roads in fact. Take the amount of roads we had in the 80’s and double it. Either that or bring back the electric streetcars that used to take up a lane on the LA freeways.  There is another option. Anyone with a spare $194,000 lying around can now own their own hover car, or should I say Terrafugia Transition plane.

You can land this sporty, street-legal, plane at an airport, fold up its wings, and then take the nearest freeway exit home. Along the way you get the added bonus of causing a flurry of tweets from those green with envy Prius drivers realizing there’s a new cool to aspire to. Forget the coolness of green, you are now the epitome of envy because you just skipped traffic.

Now, does everyone have one? No. Nor, would I like to see what accidents happen when 15 year olds learn how to fly, but it is possible, so score one for Zemeckis.

“Drying mode on. Jacket drying…Your jacket is now dry”. Not the most well known quote from the film, but worth noting. Marty has Nike shoes that lace up by themselves, an iridescent cap, and a jacket that automatically fastens and dries itself.

We don’t have cloths that automatically adjust to fit but we do have clothes that will make us drier- from Nike no less. Nike’s site espouses the new tech in it’s Dri-FIT clothing saying it’s, “This high-performance, microfiber, polyester fabric wicks sweat away from the body and moves it to the fabric surface, where it evaporates.

As a result, Dri-FIT fabric helps you stay dry and comfortable.” Not quite the personal air vent system seen on Marty, but if it helps the sweaty cyclist sitting next to me at Starbucks smell sweeter, I’m all for it.

“Shark still looks fake.” Yes it does, but a billboard that jumps out at you in 3D? That could very well happen in a few months if it hasn’t already. With the latest 3D TV’s able to immerse you into the sea of Nemo, it’s only a matter of time before advertisers seek to grab you in a not all-together subtle manner. There’s already video billboards, E! News Daily on monitors at grocery check-outs, and animated menu screens at concession stands.

What’s the chance of Jaws 19 coming to the multiplexes? Slimmer than say a redo floating to the surface along with Footloose, Escape from New York, and Robocop. If anyone has a script for She-Ra the movie, now’s the time to send that sucker in.

“OK, I want channels 18, 24, 63, 109, 87 and the Weather Channel,” said  Marty Jr., who then watched numerous TV shows at once on channels numbering in the 100’s. Yeah we can do that, but PiP is so 2000 and late. Why watch a single purpose TV when at any given point I can IM 6 friends at once, read the latest at deadline.com, Facebook pics from last night’s party, and set my AT&T U-verse to record Smallville via my laptop? Forget, multiple TV channels, try multiple windows open to multiple applications.

I also recall Marty Jr. and Marlene both wearing a set of television visors at the dinner table. The Skymall catalog sells a like visor for $250, but why bother when you can easily ignore your friends by not only watching TV, but also texting, and playing Texas Hold Em’ on a 4.5” screen? TV is a thing of the past, but increased ADD medication is so a thing of the future.

I’ve just hit on a few of my favorite wacky foresights in the Bob Gale House of Tomorrow. I’m still waiting for Biofuel to become the new Mr. Fusion. But until then, we have plenty to look forward to as the past’s vision of the future becomes outdated and the future is not only bright, but present.