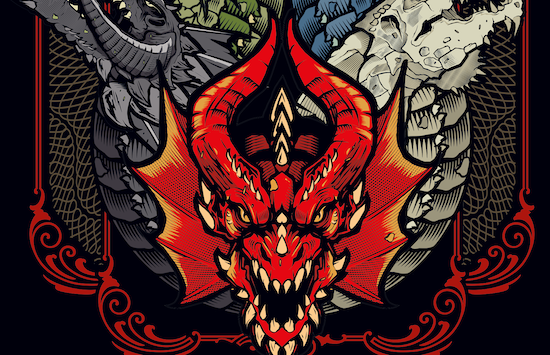 Being at home during a pandemic forced us to find new ways to entertain ourselves. One of the ways that’s worked best for us is playing games online. So, in that spirit, we’re kicking off a new series at The Flickcast called What We’re Playing.

Each week we’ll highlight a game we’re playing at home. For the first installment of What We’re Playing, we turn to an old favorite: Dungeons & Dragons.

D&D was created by Gary Gygax and Dave Arneson and first published in 1974. Since then its popularity grew considerably. Even with a slump in the late 80s and early 90s, D&D is still played by millions of people around the world. That popularity has exploded even more during the last year or two. You can probably guess why.

If you’re not familiar, or have never played, you may wonder “What’s D&D?” For that we turn to Wizards of the Coast, the company who publishes the game. From their official D&D website:

“The core of D&D is storytelling. You and your friends tell a story together, guiding your heroes through quests for treasure, battles with deadly foes, daring rescues, courtly intrigue, and much more.”

Sounds fun, right? Traditionally, D&D is played by a group of friends sitting together at a table. One person is the Dungeon Master, or DM. This person creates and runs the game, spins tales of adventure, plays all non-player characters (or NPCs) and generally is the go-to for all rules and what happens during the campaign.

The players (not the DM) create characters of their own and rollplay them during the game. You can choose from a variety of character occupations including fighter, ranger, rogue or wizard and races such as human, elf, dwarf or halfling. Then, once characters are created, players explore dungeons or ancient ruins, interact with NPCs and creatures like Orcs or Giants and even, yes, fight an actual dragon.

That’s how it’s usually done . . with everyone together around a table. But what if getting together isn’t possible?

Fortunately, there’s quite a few ways to play D&D virtually with your friends. We plan on doing an in-depth review of many of these tools in the future.

But for now, here’s a brief overview of the ones we’re using every week for our own games. (Note: Some of this information is from sources like Wikipedia or the tool’s official website)

D&D Beyond – The official digital toolset and game companion for Dungeons & Dragons 5th edition. It has online versions of the official D&D 5e core rulebooks, adventures, and other supplements and also provides digital tools like a character builder, digital character sheet, monster and spell listings that can be sorted and filtered and much more.

That may not sound like much, but believe us, it is. Even when we can get back around the table and play together, we don’t think we’ll ever give up D&D Beyond. It’s just that useful.

Roll20 – A website consisting of a set of tools for playing (also referred to as a virtual tabletop or VTT), which can be used as an aid to playing in person or remotely online. Roll20 wants to provide an authentic tabletop experience that does not try to turn the game into a video game, but instead aids the DM in providing immersive tools such as city and town maps, dungeons, combat and background music while playing online.

This is very valuable and helps create a more immersive game experience when you can see the dungeon map, move your character during combat encounters and hear the music swelling as you emerge triumphant from a near-fatal dungeon adventure. 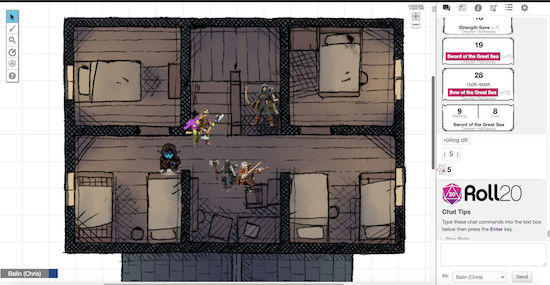 OwlBear Rodeo – A somewhat new entry into the VTT space. It’s a simplified version of something like Roll20, with only the essential features. Maps and tokens (the pieces representing players) and that’s pretty much it. It works great and has proven more than enough for a lot of our games.

There’s also a few other options for a VTT including Fantasy Grounds and Foundry. But the ones above are what we use these days.

Discord – You need a way to communicate during the game, so we use Discord. You could also use others like Google Meet or Zoom. With Discord you can chat via text, audio only or with video as well. You can also paste things like maps and creature photos in the text chat for players.

You could really just use Discord for games, which is what we did for many months. Being able to talk with fellow players and “theater of the mind” encounters and combat are often all you need for a great session of D&D. But if you want more, the VTT’s above can help you get there.

In addition to the above, you’ll also need to have a few other things.

Core Rulebook(s) – As a player, you’ll really only need the Player’s Handbook. However, if you want to take the game further and become a DM, or just want to understand the game more, you’ll want the Dungeon Master’s Guide and Monster Manual. You can get these digitally at D&D Beyond or buy your very own hard copies. Truth be told, we have both versions of the books. You never know. 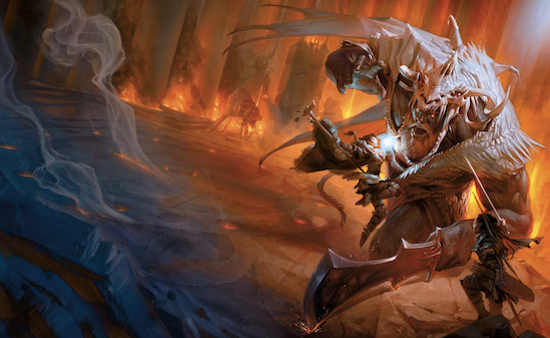 Pen or Pencil and Paper – You can take notes in something like D&D Beyond, or your favorite digital notes app, but you’ll probably still want something to write on and with. After all, when D&D started all you had was pencil, paper, dice and your imagination.

We think it’s kinda cool to honor those roots by making notes by hand about the adventure, your character, treasure collected or magic items found . Of course, you don’t need to anything special to do this. Pretty much any pen and pad of paper will do. These are just some of the ones we really like and use all the time.

Favorite pens and pencils include the Pilot G2, the Uni-ball 307, the Musgrave Tennessee Red, the General’s Test Scoring 580 and the Palomino Blackwing 602. Favorite notebooks include the Baronfig Confidant, the Field Notes Original Kraft and 5e gaming Journals, and the Wright Notepads Dot Grid.

If you’re really old school, like many of our players, you’re gonna need at least one more thing: some kickass dice. We like and use dice from places such as Die Hard Dice, the d20 Collective and Chessex. Of course, those Wyrmwood dice and dice trays are pretty cool too.

But again, you don’t need fancy dice to have a great time. A set (or two) of polyhedral dice from Chessex will work just fine

That’s pretty much it. Now you just need to gather some friends and start your online adventure.

What are you playing right now? Let us know in the comments. Look for another installment of this series next week.

Until then, happy playing!

Images: Wizards of the Coast / D&D Beyond