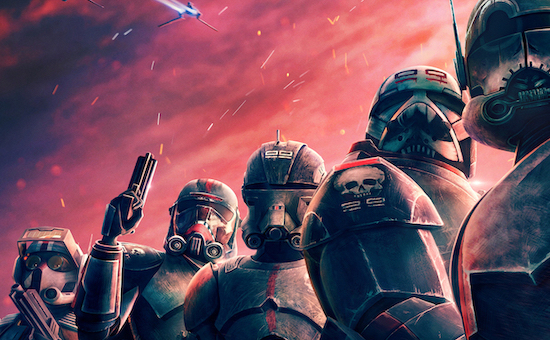 It’s Trailer Time again here at The Flickcast. Yeah, we know, we just did one. But this brand new one for Star Wars: The Bad Batch is pretty important.

It is Star Wars, after all. And we don’t pass up a chance to talk about or feature or generally get excited for anything Star Wars around here. Not with nerds like Chris and Joe in charge.

So, to put it mildly, this The Bad Batch trailer looks pretty awesome. In fact, it looks really awesome. We’re also very happy it’s produced by Dave Filoni (of The Clone Wars and The Mandalorian) and features the voice talents of Dee Bradley Baker, Ming-Na Wen, Stephen Stanton and Andrew Kishino.

But what’s it all about, you may wonder? Here’s some info from the official synopsis:

“Star Wars: The Bad Batch” follows the elite and experimental clones of the Bad Batch (first introduced in “The Clone Wars”) as they find their way in a rapidly changing galaxy in the immediate aftermath of the Clone War. Members of Bad Batch—a unique squad of clones who vary genetically from their brothers in the Clone Army—each possess a singular exceptional skill that makes them extraordinarily effective soldiers and a formidable crew.”

We. Can’t Wait. Fortunately, it won’t be too long. Until then, check out the trailer below.

Look for Star Wars: The Bad Batch to hit Disney Plus on, you guessed it, May the 4th.