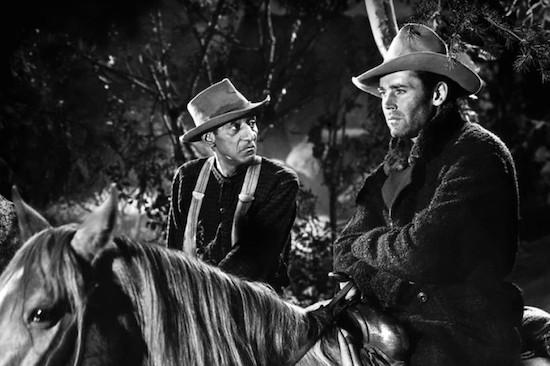 Today’s Western Wednesdays Again comes to you courtesy of a name drop by the big man himself, Clint Eastwood.  If Eastwood casually says The Ox-Bow Incident is a really good Western, you have to drop what you’re doing and watch it.   Considering it’s only one hour long, it’s pretty easy to find some time to do it!

I can see why Eastwood likes Ox-Bow. There are shades of Hang ‘Em High and Unforgiven in it. It’s the kind of film that reminds me why I was so eager to explore this genre. We all tend to classify Westerns as rousing shoot-em-ups and masculine swagger, but there are a lot of dark, bitter stories hidden among the John Ford panoramas.

This film is often billed as a Henry Fonda movie about cattle rustlers, giving the impression it’s a classic horse opera, but nothing could be further from the truth. This is a haunting morality play that takes the glamor out of posses and deputies, emphasizes the danger of a mob, and makes you think twice about rooting for Wild West justice.

While Eastwood has been credited as “killing” the Western with Unforgiven, I think The Ox-Bow Incident may have done it back in 1943. Ox-Bow also has a very curious undercurrent running through it — it’s all about the absence of women. While it’s played for laughs through much of the film, it becomes an uncomfortable point by the end.

It’s hinted repeatedly that the town’s lack of women (or “amusement” as Carter gripes) encourages the bloodlust, and the sobering “civilization” speech at the end all but drives it home. It’s a little acknowledged fact that in the American West, civilization was the province of women.

Men went West, drove away its native inhabitants, drew the boundary lines, and built shanty towns. Once it was relatively tame, women came West and brought schools, libraries, churches, and theater.  It’s just one of the reasons we have such an anti-intellectual streak, and why culture has often been thought off as “soft” and feminine. John Wayne and Clint Eastwood heroes didn’t have time for book-learning, but the womenfolk did.

Lest you think I’m playing Women’s Studies 101 here, remember Unforgiven plays with that concept too. If Claudia was alive, William Munny wouldn’t be out for blood, no matter how desperately he needed the money. If the Ox-Bow boys had girls (or at least a dance hall where they could look at them), they might not be so eager to form a hanging party.

The Ox-Bow Incident will keep you on the edge of your seat (but not for the usual cowboys-and-Indian reasons), and make you really appreciate what some filmmakers did with this genre. AMC needs to dig this film out of the archives and play it instead of Joe Kidd.

In this era of violent town hall meetings and shrieking about death panels, it would send just the right shiver down viewer spines.  Because it’s a hell of a thing, killin’ a man — take away all he’s got, and all he’s ever gonna have.

The Ox-Bow Incident stars Henry Fonda, Dana Andrews, Harry Morgan and Anthony Quinn. It’s written by Lamar Trotii, based on the novel by Walter Van Tilburg Clark, and directed by William A. Wellman. Look for it on the various streaming services.