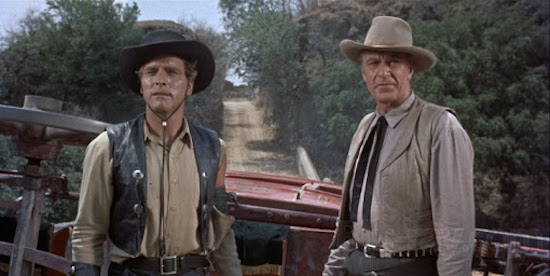 It’s time for another edition of Western Wednesdays Again. This week it’s the 1954 release Vera Cruz, a film that’s often name-dropped in the discussion of “Great and Influential Westerns.” Starring genre heavy-weights Gary Cooper and Burt Lancaster, every synopsis you read about this film likely promises adventure, a Mexican countess and bromance. Don’t believe them.

Vera Cruz is set in the midst of the Mexican Revolution of 1866, a time when mercenaries and adventurers crossed the border in search of profitable employment. In fact, it’s the very same setting as Two Mules for Sister Sara. Who knows, if fanfic had existed in the good old days, someone might have written a sexy crossover. Thank goodness it didn’t and they didn’t.

The film wastes no time in setting up Ben Trane (Cooper) and Joe Erin (Lancaster) as that most reliable of Western archetypes: the broken down Confederate, and the daring mercenary. Their characters are rigidly defined within the first ten minutes over the matter of horseflesh. Trane shoots his injured horse because it’s suffering.

Erin responds by selling him a stolen one. Despite their inherent differences, they bond after a skirmish. Trane then joins Erin’s mercenary band. After that, they ride to the next Mexican hamlet seeking riches and their guns are immediately sought after by the Juaristas and Emperor Maximilian.

They chose the Emperor because he pays more, and are handed the task of escorting a countess to the port of Vera Cruz. Naturally, there’s more to the countess’ coach then her French wardrobe, and every character is eager to lay their hands on it. It’s a Western with a heavy dose of noir as everyone double and triple crosses everyone else.

Vera Cruz may be influential, but I don’t think it’s a particularly good movie. The dialogue is stilted, the characters are paper thin, the twists predictable, and the performances aren’t what you’d expect out of two such wonderful actors. Lancaster spends the entire film with a sociopathic grin that’s supposed to be charming, and Cooper’s poor health is evident.

Oh, if you ever want too much information about Cooper’s inner workings, click on the IMDB trivia for High Noon or Vera Cruz. He was also uncomfortable playing a “bad” character, a visible fact which actually works in the film’s favor as Trane is clearly not cut out to be a mercenary.

Still, if you’re an eager student of film history, you’ll probably find Vera Cruz to be worth your time. Not only was it a film that angered Mexico enough to force Hollywood to include positive portrayals of their people, but it was quite cynical and violent for the time.

The film was cited by Sergio Leone as one of his influences and favorites, and it’s easy to see where he took notes. The characters are sweaty and disreputable, and Erin is an obvious precursor to the casual killers of Leone.

In fact, I almost wish Leone had written his own Ben Trane, and forced him into friendship with The Man With No Name. It would have been a lot of fun to see such a cold character having to work with someone who still had some moral fiber. I’m also convinced George Lucas borrowed a bit of Lancaster’s Erin for Han Solo as  they wear the same costume and they have a similar lust for profit.

The cinematography is also pretty breathtaking. It was one of the first major Hollywood films to be made in Mexico, and the crew took full advantage of the location. There are spectacular shots of Mayan structures (or what I think are Mayan structures — my pre-Columbian knowledge is spotty), and they provide an eerie backdrop that I’ve never seen in a Western before.

The final battle is also pretty interesting, because it just begins. Modern battle scenes are inevitably filmed the same way — elaborate plan and set-up, rallying Braveheart speech, gulp worthy charge into gunfire.  This one just flings you into the tail end of the fray, and it’s pretty refreshing. If you’re ever looking for an innovative and cheap way to shoot a battle, you might want to study this one.

I will risk being sacrilegious, and say that I’d love to see Vera Cruz remade. Yes, it has some high points, but it’s a film that goes along awfully glibly until its dark ending. There’s really something deeper to be mined out of the story.

Trane’s troubled mercenary is worth a rewrite,  the situation he and Erin find themselves in could be a lot more perilous, and their relationship a lot more complex. It’s worth watching as an exercise of what could have been, and an appreciation of what came after, but it’s not the most exciting Western to ride with.