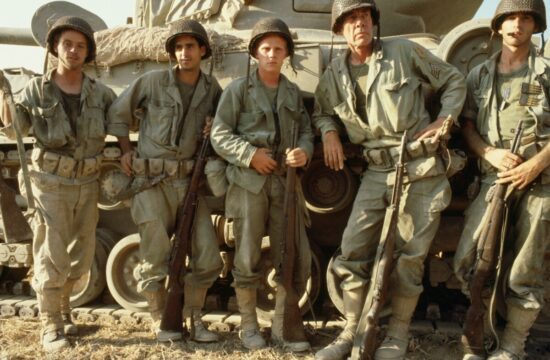 This version of the 1980 film was released several years following Fuller’s death in 1997 as a tribute to his lasting work and the version he intended audiences to see. When this restored and augmented version was released in early 2005, I was overjoyed to see the original forty seven minutes, which Fuller was forced to cut by the Warner Bros. executives, restored to the film. It definitely makes for a more compelling film and adds depth to the characters.

The Big Red One opens in November 1918 as the guns fall silent on the Western Front in France during World War I. Lee Marvin’s character begins his military career as a private who outlasts the first world war only to find himself, twenty five years later, fighting once again on the battlefields of North Africa, Sicily, and Europe. The film serves as a combat diary of Marvin and his rifle squad of young, inexperienced boys who fast become hardened soldiers.

As the sergeant of the squad, Marvin’s main job is to ensure he returns his men home safely. But the horrors of war and combat prove too much for the men. This is especially true for Griff, who after his first battle in North Africa, declares that he can’t murder anybody. The sergeant replies “We don’t murder, we kill. You don’t murder animals, you kill them Griff.”

As a masterpiece and lasting example of his work Fuller shows that even in war, there are brief moments of levity and enjoyment. In one scene following the allied defeat at Kasserine Pass, Tunisia in February 1943, Marvin’s character wraps himself in an “Arab bed sheet” to escape a German hospital after he sustains injuries during the battle. When he returns to his regiment, his troops are happy to see that he is still alive and ready to once again lead them into combat.

In another scene as they are scouting enemy positions ahead of the main American push in Sicily, the squad retreats into a cave as German tanks move in on their position. A massive artillery barrage via the U.S. Navy offshore saves them from annihilation. As the scene ends Marvin’s character quips “Can you believe that. The U.S. Navy just saved our ass.”

My favorite scene in the film is the assault on Omaha Beach during the June 6th, 1944 D-Day landings. Believing that the beach is not heavily defended and that it will be a routine amphibious assault like all the others, the men of the 1st division find out that they are about to fight their most crucial battle. Marvin’s squad must breakthrough a wall of barb-wire and anti tank traps in order to exit the beach and move inland to secure a foothold in German occupied France.

A relay involving Bangalore torpedoes (pipes assembled and filled w/ high explosives) must be performed by each man of the squad. As the last pieces are assembled and placed at the base of the obstruction, the men of the 1st squad, 3rd battalion, I Company inform their colonel that its time to leave the beach and finally head inland. A remarkable scene and a testament to the bravery of the men who fought and died on bloody Omaha beach.

The film also serves to demonstrate the often futile nature of war itself. This is best illustrated when the sergeant and his squad arrive at the very same location where he fought near the end the first war. The soldiers gather around a monument erected for the 1st division.

The Big Red One has always been one of my favorite war films and it is my favorite Lee Marvin film next to The Dirty Dozen. Samuel Fuller still remains one of my mentors and inspiration as a filmmaker and film buff. Look for a brief cameo by Fuller as a war correspondent filming civilians as the 1st division enters Germany in late 1944.

The Big Red One: The Reconstruction is available on Blu-ray or can been seen on various streaming services. If your’e a fan of war movies, Sam Fuller or the kid from Star Wars, this movie is well worth your time.