Western Wednesdays Again: The Quick and the Dead

Western Wednesdays Again: The Quick and the Dead 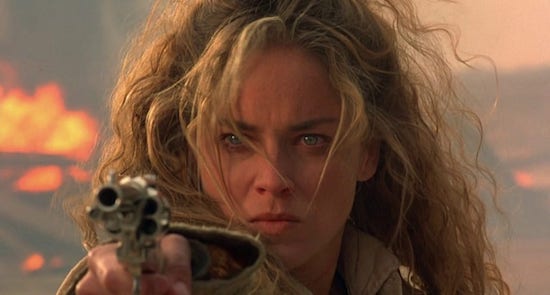 I was all about sci-fi and fantasy, and no history was interesting to me unless it was medieval and European. Westerns were a dusty, dull genre where everyone just drank whiskey,  had silly shoot-outs, went on cattle drives, and visited brothels.

My family rented The Quick and the Dead, and my world was rocked. This Western starred a woman — a mysterious woman with no name. She rarely spoke, and when she did it was always snarly. She smoked a cigar.   It was the most original character I had ever seen.

Well,  I wasn’t always very film literate. Clint Eastwood was just a cranky old man who had made too many Dirty Harry movies, and had frightened me by taking his shirt off that same year in The Bridges of Madison County. And I hated Westerns, remember?

Though I’m wiser, and I know Sharon Stone is doing an extended Eastwood impression, I haven’t lost my fondness for this film. If anything, her cigar-chomping impresses me even more.

After all, this movie is twenty five years old and it’s still rare to see another female gunfighter like this. (Frankly, we could use a few more women imitating Eastwood characters, and fewer imitating Carrie Bradshaw, or someone like that. But that’s another story).

Over the years, I’ve found a lot of people disdain The Quick and the Dead for that very reason. Fans of the Western find it corny and derivative, and many Sam Raimi fans seem unaware it exists, or ignored it because they hate Westerns. In my experience, the film is a redheaded genre stepchild, unloved by everyone, forgotten by the years.

That should change. This is a fun film that embraces Leone’s “fairy tales  for grown-ups” ethos. It’s pure pulp Western that gleefully lifts from everyone, and then pits all those caricatures against each other for the pleasure of Gene Hackman. I truly believe Hackman’s Herod is the really evil twin of Unforgiven’s Little Bill Daggett.

There’s no social commentary,  there’s no eulogizing, there’s just killing, banter, and more killing. It’s not even possible to draw your gun in Raimi’s West without cockily twirling it, even if you’re devoting your life to good works and pacifism. I often wonder if Russell Crowe’s tormented Cort is a nod to Eastwood’s William Munny, but I suspect that’s just fanfictioning it.

This is a Western for people who hate Westerns, or for fans who really want the genre to be fun again. We Americans know by now that the Wild West wasn’t really all that Hollywood and grade school history portrayed it as. That self-realization made us freeze, and worry about making movies that played games with our country’s mythology.

But now we seem to have hit a point where we can again be comfortable exploiting those spurs, chaps, and six-shooters for fantasy. Heck, France and Korea don’t worry about it, why should we?

Sam Raimi was ahead of his time with The Quick and the Dead — and it’s high time fandom caught up.

The Quick and the Dead is available on various streaming services and on DVD and Blu-ray. Save it for your weekend and enjoy.