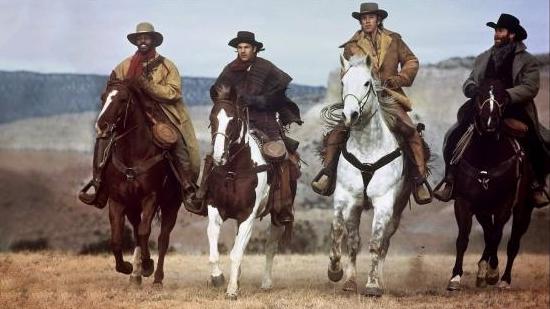 For this week’s Western Wednesdays Again we’ve got Lawrence Kasdan’s 1985 epic Silverado. Let’s get to it.

“A Western like you’ve never seen before … An exciting new look at the Old West.”

Oh, taglines. I like when you do my work for me. You just described what Silverado isn’t!

I’ve had this one in my queue for quite awhile. I’ve anticipated it greatly. Writer and Director Lawrence Kasdan is no slouch with pulp-oriented films like The Empire Strikes Back and Raiders of the Lost Ark to his credit so I had high hopes.

If there’s one thing Kasdan knows, it’s action adventure, right? Not when it coms to Silverado, a film that misses the mark so often that I fail to see how it’s garnered 2-disc collector sets and such enthusiasm among Western fans.

I suppose it’s all due to Costner. Little baby Costner. This is the film that made him a star and a dreamy genre successor to John Wayne and Clint Eastwood. They seem to have costumed him with that very idea in mind, because he wears a variation on every famous Western and cowboy look ever filmed.

At one point, he even wears a serape. He’s a weird, goofy character — I can’t tell if he’s special or just supposed to be extremely young — and the highlight of the film is undoubtedly when he decides his horse needs to wear a hat. It just comes out of nowhere. Costner walks down the street, happy as a clam, and his horse is wearing a cowboy hat.

Even with a hat-wearing horse, it has potential. Oh, so much potential. The cast is fantastic: Scott Glenn, Danny Glover, Kevin Kline, Kevin Costner, Brian Dennehy, John Cleese, Linda Hunt and Jeff Goldblum. Unfortunately, the mere excitement of such an ensemble seems to have unnerved Kasdan, and they’re all wandering around without much to do.

They’re so likeable that you’re dying to see them do something, but they just kind of kick around before rallying behind the town of Silverado. Even then, it’s Kline who gets the big showdown, and it’s such a momentous shot (complete with the obligatory close-up of the hand hovering over the gun) that you’re taken aback.

Was he the main character then? The one you were supposed to be following the closest? Well, all right. I hope he survives the gunfight, then.

Kline’s Paden is the most compelling, for what it’s worth. He’s a bit of a dandy, well-spoken and educated, a man who is happiest in a saloon. He takes a job at Silverado’s posh drinking hole, the Midnight Star, and strikes up a cozy and platonic relationship with the diminutive Stella (Hunt).

Of course, the saloon and all its businesses are involved in one big payoff scheme, and the sheriff (Dennehy) is in on it. Paden is supposed to just stand at the gambling table and be friendly, ignoring the slaughter of the simple townsfolk. There’s a great, tense Western to be made of Paden’s story, and why he forms odd relationships that tug on his heartstrings, and leave him paralyzed with inaction.

Kline could have run with such a role. I’m annoyed Kasden introduced Goldblum and prostitutes and robbed him of his arc, such as it was. It’s not right.

Unfortunately, Silverado is too busy throwing in love plots that go nowhere, storylines of racism, corrupt ranchers, kidnappings, jokes, and gosh knows what else. I’m missing something, but it doesn’t matter. It hits all the beats of the genre without ever making them mean anything new or compelling.

Again, there’s a brilliant, dramatic movie to be made out of Danny Glover’s Malachi Johnson, who finds that the color of his skin matters just as much out West as it did down South. But the fact that it’s handled so poorly makes you wish they’d gone the color-blind route of The Professionals.

The film is beautiful, though. The costumes and the Silverado set are top-notch. And the snowy New Mexico landscapes are breathtaking. Gorgeous landscapes are a hallmark of the genre, but it seems like the 1980s and the 1990s began focusing on the prairies and mountains that had been eschewed in favor of deserts and Monument Valley. I have no way of proving that as yet, but I’m watching to see if I can pinpoint a shift or if I’m full of it.

Believe me, it may be the latter. I’m getting so involved in horse operas that I’m becoming fixated on the most inane bits of iconography. With Silverado, it was The Coat Flip. You know — one man threatens another in a saloon or on a street, and the threatened responds by flipping back his coat to show he’s packing heat. It’s like they’re wearing coats just so they can do that badass little gesture.

I find it fascinating because it’s so unique to Westerns and so stubbornly American. Think about the 19th century in any other corner of the world. Sherlock Holmes is a contemporary with the cowboy, but he never does a coat flip.

In fact, guns were rampant in Victorian England too, but they weren’t shooting each other over card games, prostitutes, and whiskey. There’s something odd about why our country was founded on the quickdraw and the coat flip, and it’s a question sociologists and historians are always going to ponder.

The movies, at least, make it easier. It just looks cool. And Silverado proves that when all else fails with your plot, you can just have your characters flip their coat over their holster, and the tension gets cranked up a notch or two until you can figure out what to do next.

Look for Silverado on the various streaming services or on DVD or Blu-ray.