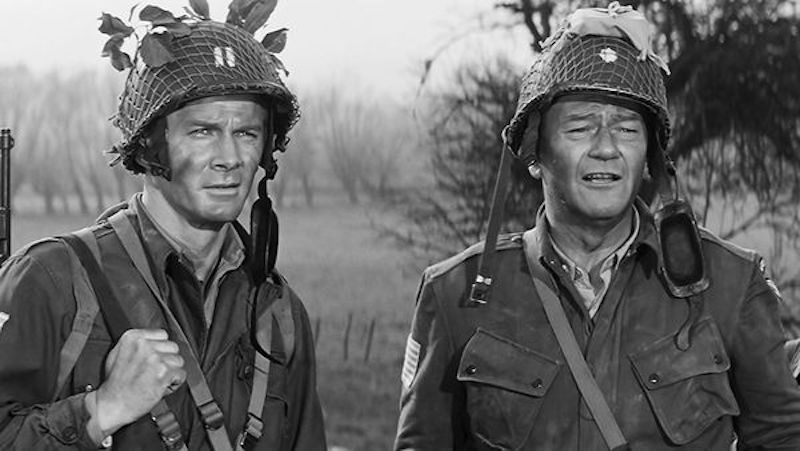 It’s time for another edition of War Movie Mondays Again where we take a look at a classic (or not-so-classic) war movie you may or may not have seen. This week it’s the 1962 “Grandaddy of all war movies” The Longest Day.

With a cost of over over $10 Million, The Longest Day features a cant of over forty-two of the most acclaimed (at the time) actors  including Eddie Albert, Paul Anka, Richard Beymer, Red Buttons, Mel Ferrer and Henry Fonda. It also features Jeffery Hunter, Roddy McDowall, Robert Mitchum, Robert Ryan, Steve Forrest and the Duke himself, John Wayne. The cast is huge and this is something you rarely, if ever, see anymore.

Some of the things that set The Longest Day apart from other war films was it had such a grand cast, was shot entirely in black & white (to match actual footage shot during the invasion) and showed all perspectives of those who fought on D-Day. Two versions of the film were shot simultaneously. In one the French and German scenes were spoken in English rather than in their native languages. In the other, the native languages were used.

When the film was re-released in the late 1960s as a way for America to help justify its presence in Vietnam, the English version was shown in theaters and drive-ins across the U.S. When the film first came to home video in the 1980s, there were either two VHS tapes, or later with DVDs, two version of the film for purchase.

Today, the film has been meticulously enhanced to give the viewer the best version from its original vault materials. It is absolutely breathtaking on Blu-ray. I highly recommend picking it up if you own a Blu-ray player, or getting one if you love this film as much as I do.

I first discovered this film as a “late, late, late, why aren’t you in bed movie?” on TV one night when I was about eleven or twelve years old. It was around that time I first began my fascination with World War II and my love for cinema. My father told me he first saw the film at New York’s famed Ziegfeld theater when it debuted in 1962.

My father was a veteran of Korea and had spent a few years in the Army. Despite certain inaccuracies, he always said it was one of his favorite war films and we would watch it together from time to time.

In 2005, I went with my family for a few weeks vacation in Europe which included England, Scotland, and France. On our second day in France, I took a train to Normandy from Paris. Within two hours I disembarked at the city of Caen, which was a city that was virtually wiped off the map due to British Lancaster bombers.

I met with a small group of tourists and our guide for the day to go and visit the beaches and the cemeteries. Riding through the Normandy countryside sent chills up my spine.

When we arrived at Omaha Beach, which was one of two American landing zones, we went into the fortified bunker complexes that the Germans built as defensive positions overlooking the English Channel (the famed “Atlantic Wall.”) I soon felt like Hans Christian Blech’s character when at dawn he looks through his binoculars and sees the massive allied armada heading straight towards him through the morning fog.

He then looks at his men with terror and in German says “The invasion, it’s here.” It is a moment that I will never ever forget.

One of my favorite scenes in the film, besides when the invasion begins at dawn with the landing forces, is the scene when the U.S. 82nd Airborne Div. overshoots their drop soon outside the city of St. Mere Eglise. The city was a vital link for many roads throughout the Normandy region. If the Germans held the town, they could use those roads as a way to re-supply units that were dug in behind the beaches waiting for the amphibious troops who would come ashore at dawn.

Shortly after midnight, thousands of American paratroopers came down in the center of the town and were massacred by the terrified German garrison there. Red Buttons character was the man whose parachute got hung up in the church tower and remained there for hours until he was able to be freed from the church’s steeple. To this day, the people of St. Mere Eglise keep a dummy parachutist hanging off the steeple in memory of Steele and the sacrifice the 82nd Airborne made for the townspeople.

Other notable performances in the film include future Bond villain Gert Frobe as the German Sgt. named Kaffeekanne (which means coffee pot in German) who brings coffee to the beach gunners and is caught in the massive allied artillery barrage.

Curt Jurgens, another future Bond villian, is not a glory seeking Nazi, but a proud soldier who questions the motives of not only his commanding General, but his Fuhrer as well. In fact, there is not one “Sieg Heil” throughout the entire film.  During the war, Jurgens was actually imprisoned by the Nazis.

Richard Todd, another actor is the film, actually fought in Normandy. He wears the actual beret of Major Howard in the film. Sean Connery also makes his debut as one of Lord Lovat’s commandos who storms ashore at Sword Beach so they can head inland and relieve British paratroopers who are defending the Pegasus Bridge over the Orne River.

Others screen greats including Charlton Heston and British horror icon Sir Christopher Lee were denied roles because they were not “military looking enough.” Lee himself served as an intelligence officer with the R.A.F. during the war. And lastly, Richard Burton plays a grizzled R.A.F. pilot who is shot down over the night and is wounded in his leg. He befriends a lost American paratrooper (Beymer) at the end of the film and both wonder how the invasion has turned out.

The Longest Day also boasts one of the largest collections of military advisers for one film. Many of the advisers are depicted in the film by their Hollywood counterparts. The Longest Day was one of the greatest undertakings of old fashion Hollywood epics. Sadly, a film of such magnitude would rely heavily on CGI instead of practical locations and thousands of extras or props. It’s a film that would probably cost $300 Million (or more) if made today. It’s unlikely Hollywood is ready to put up that kind of money anytime soon.

But that’s okay. The Longest Day is a masterpiece that should be left alone. A remake or “re-imagining” would destroy or distort the message it was sending to audiences in 1962. World War II was still fresh in the minds of its veterans and the film was a lasting homage to the bravery of men, on both sides, who fought in one of history’s greatest battles.

The Longest Day is available on DVD and Blu-ray through 20th Century Fox Home Video and on various streaming services.