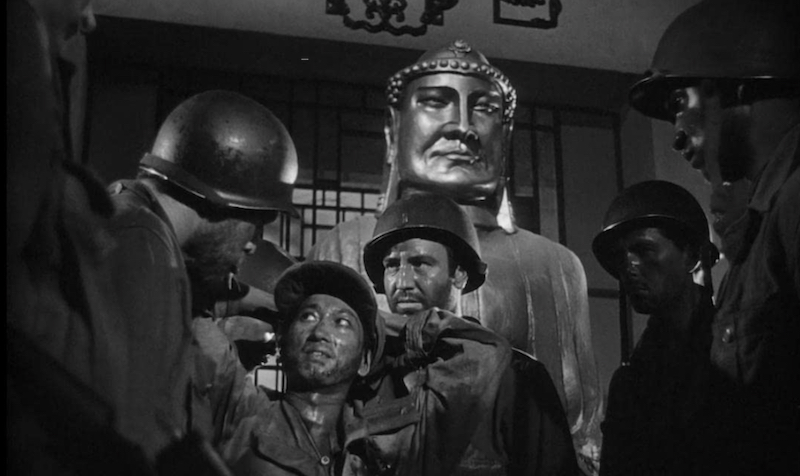 The Steel Helmet is one of the most honest, unflinching, in your face war films ever made. Set during the opening stages of the Korean War, the film follows a small squad of Americans who face off against an unseen enemy. Actor Gene Evans makes his big screen debut as Sergeant Zack, a World War II veteran who finds himself in a new kind of war.

The film opens with a tight close-up shot of a steel helmet that’s been punctured by a bullet. Soon, it’s revealed to be Sgt. Zack who’s the lone survivor of an enemy attack that massacred his entire outfit. With his hands bound behind his back, Zack tries to free himself.

A young South Korean boy (William Chun) comes to Zack’s aid and frees him. The boy is nicknamed “Short Round” by Zack who allows the kid to tag along with him until he can find another American outfit to join up with.

As Zack and Short Round are making their way through a wooded area Zack hears a noise and tells Short Round to “Eat rice”. They’ve come across another American, a medic who is also a survivor from an enemy attack. Corporal Thompson (James Edwards) joins up with Zack and Short Round. It is also revealed that Thompson is a World War II vet and his experiences during the last war mirror that of Fuller’s own combat diaries with the First Infantry Division.

Shortly after, Zack and the others encounter an American patrol led by the green, inexperienced Lt. Driscoll (Steve Brodie) who commands the quintessential, stereotypical squad from most war films. Fuller handpicked most of the actors that represented the different types of service men who were serving in Korea.

One of my favorite scenes in the film is when the squad is taking five and trying to get their bearings. One of the men discovers a dead American and is asked by the Lt. to get his dog tags. Thompson asks the G.I. if he’s sure the grunt is dead. Zack informs the Lt. that the man is nothing more than a corpse and trying to get his dog tags is suicide.

The Private goes to get the dog tags from the body and trips an explosive charge that kills him. The other men fall to the ground as the smoke and debris fill the air. Zack mutters “Get his dog tags….big deal.”

The Lieutenant’s mission is to establish a forward observation post at an abandoned Buddhist temple. Much like other war films like Men in War (1957), the “90 day wonder” Lt., relies on the experience of the Sgt. In one scene, Zack and the Lt. are walking together and Zack marvels at the fact that the peasants traveling down the road are not peasants, but enemy troops in disguise.

The film is also one of the first films to address race issues concerning Black and Asian Americans who were serving in the war. When the squad arrives at the temple, they encounter a North Korean Major who tries to subvert both Thompson and Tanaka (Richard Loo), a Nisei soldier also left over from World War II. Thompson dresses the Major’s wounds and the Major asks why Thompson would fight for a country that hates him and refuses to let him interact with whites unless there’s a war on.

Thompson refuses to be drawn in and subverted by the Major. Tanaka’s parents were interred during World War II along with thousands of other Japanese Americans who were considered a threat to the United State’s war effort. This was the first mention of the interment camps in a film.

The Steel Helmet was written by Fuller in less than a week and was filmed in just under ten days with twenty-five extras who were UCLA students. The majority of the film was shot in Griffith Park for about $100,000. It went on to gross over $6 Million at the box office.

The scene’s in which the mention of Jim Crowe laws and the interment of Japanese Americans in World War II angered the U.S. Army which gave very limited technical support of the film, mostly stock footage from World War II and Korea. Fuller made no apologies and made the film the way he wanted to make.

The film has been a landmark for future directors like Martin Scorsese who used one of the film’s signature scenes in his Academy Award winning film Raging Bull. And, of course, Steven Spielberg used the name Short Round for Indy’s sidekick for Indiana Jones and the Temple of Doom. Quentin Tarantino also borrowed several elements for his Academy Award winning exploitation film Inglorious Basterds. All three directors (and many others) site The Steel Helmet as an inspiration.

The Steel Helmet is available on DVD through Criterion and on various streaming services.