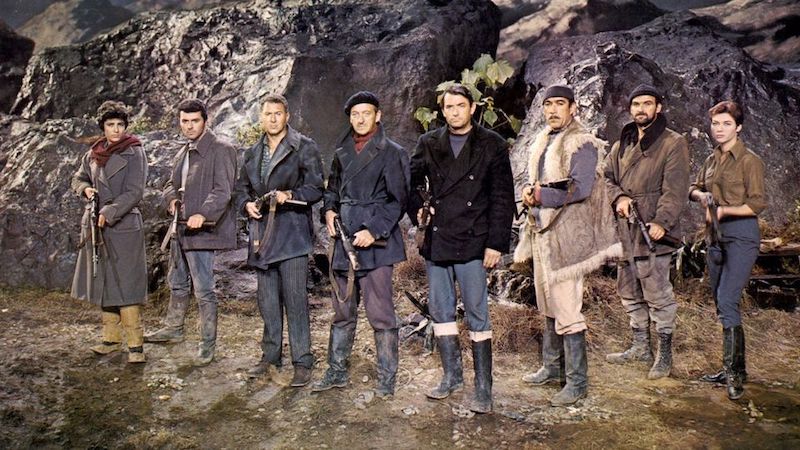 The film is set during the Dodecanese Campaign of WWII from September 8th to November 22nd, 1943. The Germans had smashed South through the Balkans into Greece beginning in late 1940. Their Italian allies held several of the Greek islands in the South-Eastern Aegean Sea and used them as staging areas to help the Germans conquer the Greek mainland. Fascist leader Benito Mussolini referred to the island of Leros as “the Corregidor of the Mediterranean.”

It was also hoped that Germany could cajole neutral Turkey to enter the war as a member of the Axis. The Allies tried several attempts to capture the islands in order to counter the German push through the Balkans into Greece, but all attempts had failed.

MacLean’s story pits a small group of commando saboteurs who infiltrate the German held island of Navarone which houses giant radar controlled guns. These guns threaten two thousand British soldiers on the nearby island of Kheros and any ships that try to traverse the Aegean.

The guns are fixed inside a mountain fortress which gives them a superb field of fire for miles around. Numerous air attacks have proved futile and the The Royal Navy wants the guns knocked out within six days so the beleaguered men on Kheros have a chance to be rescued before their provisions run out.

Maj. Franklin (Quayle) is chosen to lead a small allied force in order to blow up the guns from within their emplacements. The mission has been dubbed top secret and the men are unsure of their chances for survival. Capt. Mallory (Peck) and Col. Stavrou (Quinn) have a rather unique relationship with one another. Col. Stavrou was a member of the defeated Greek army and has pledged his help to the Allies in order that Greece will one day be liberated.

Mallory confides in Franklin that Stavrou has sworn that when the war is over, he will kill Mallory for inadvertently killing Stavrou’s wife and children. After learning this fact, you also begin to wonder if the mission will be successful at all.

The suspense of the film is well paced and full of action as the commandos assume the identities of Greek fishermen in order to navigate through enemy infested waters on their clandestine journey to Navarone. In one scene, they are discovered by a German patrol who wish to come aboard and inspect their boat. The commandos kill the Germans and destroy any evidence of the fight in order to continue on with their mission.

A fierce storm destroys their boat and they lose most of their food and medical supplies. Franklin’s leg gets injured and eventually he succumbs to gangrene. Double crosses, fear of the enemy closing further in on the commando team who are more unsure of the success of their mission ensues.

One of the most brilliant deceptions occurs when Mallory takes command of the mission after Franklin tries to commit suicide due to his condition. Miller (Niven) fears for the life of his friend and recommends that he be given to the Germans so he can be treated medically.

Mallory fears that Franklin may tell the Germans all the details of the mission which compromises the safety of them all. Mallory tells Franklin that the mission has been scrubbed due to the events at hand so if he’s drugged by the Germans, he’ll give them the wrong information to mislead them.

As the film builds towards its explosive climax, Mallory and Miller infiltrate the gun complex. Their plan is to rig the giant shell hoists to set off a chain reaction of explosions that will destroy the guns. The suspense and action are fantastically executed as Miller and Mallory plant numerous fake explosives to misdirect the Germans away from the real ones which they hope will destroy the entire complex.

The Germans fire the first salvo against the British ships, while Miller and Mallory jump into the water in order to be picked up by their comrades. The hoist elevators finally hit the hidden explosives and the complex is destroyed. The guns then fall into the water below while Mallory, Miller, Stavrou, and Maria watch from the speed boat. The British destroyers sound their horns in celebration over the destruction of the so called impregnable fortress.

Mallory had also saved Stavrou who was wounded in the shoulder and had almost drowned. He is still aware Stavrou is a man of his word and will kill him when the war is over. Mallory saves him anyway and Stavrou abandons his plans for vengeance. Maria and Stavrou decide to go back to Navarone and continue the fight against the Germans, while Mallory and Miller rejoin the British forces who have successfully liberated the men on Kheros.

During the filming in the gun complex, David Niven became ill as a result of shooting in a pool of water underneath the shell hoists. Scenes were filmed around his hospitalization while other scenes were performed by a double. It was feared he would be unable to continue filming. Fortunately, after a few weeks he recovered enough to continue.

In spite of problems during filming, The Guns of Navarone was a huge commercial and critical success for Columbia Pictures in 1961 and earned a profit of over $18 Million. It was nominated for several Academy Awards including Best Picture, Best Director, Best Film Editing, Best Original Score and Best Sound. It went on to win for Best Effects by Bill Warrington and Chris Greenham.

The Guns of Navarone came during a huge resurgence of World War II dramas. These films were box office gold for Hollywood at the time. Other released during this time include The Bridge on the River Kwai (1957), The Longest Day (1962), and The Great Escape (1963).

The Guns of Navarone is available on DVD and Blu-ray and on various streaming services.