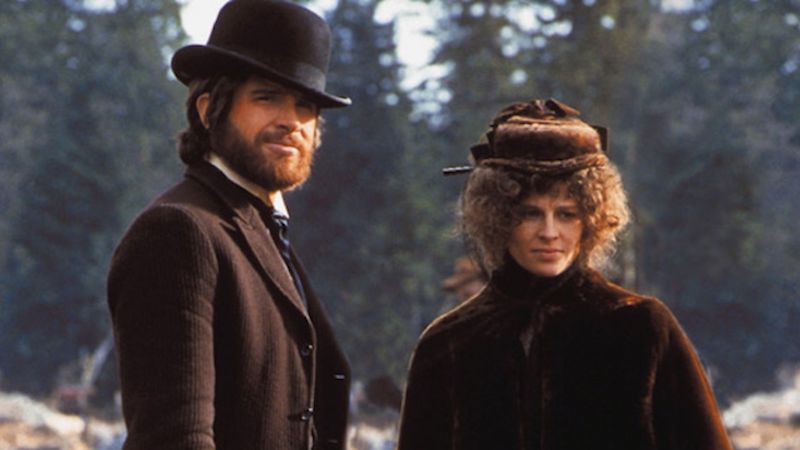 It’s time for another edition of Western Wednesday Again where we explore a classic Western film or TV show we love. This week it’s Robert Altman’s 1971 Revisionist Western McCabe and Mrs. Miller.

As a general rule, Westerns tend to be what Sergio Leone labeled “fairy tales for grown-ups.” They may not always be sophisticated, but they reside in a quasi-historical land of cool where even the dust, sweat, and blood seems to be part of the fun. Very few Westerns ever delve into the brutal realities of the frontier.

There’s a good reason for that – misery is not entertaining.  McCabe and Mrs. Miller is proof of the rule. This is not a enjoyable movie. This is the bonechilling reality that underpins all your Western myths, Manifest Destiny, John Ford and Conestoga wagons.

Robert Altman’s unfortunates come before all that. They’re the desperate people scraping a town together for their own profit so that civilization can come in and build over the opium-addicted ashes.

McCabe and Mrs. Miller is a footnote-in-history movie, the kind of story that exists only in dusty judicial records. McCabe (Warren Beatty) arrives in a mining outpost and decides to build a brothel.  Mrs. Miller (Julie Christie, the most beautiful woman alive) gets wind of it, and arrives to muscle in with her superior knowledge. They’re a success, and of course big business gets wind of it, and wants to buy them out.

McCabe dissembles, and they send in the bounty hunters.  No, it doesn’t end well.

I suspect this is why people don’t really like studying history. When we brag our towns were founded in 18whatever, we like to imagine sturdy, God-fearing folk laying the first bricks. We tell everyone about how  they fled Ireland, England, Germany or Sweden in order to make their own way. It’s romantic.

No one likes to think they had Constance Miller in their family. She clearly came from the Old World, but she didn’t wind up in a pretty cabin with John Wayne, five chubby children, and a thousand acres.

She wound up a prostitute, albeit a savvy one, and you can’t really begrudge her the opium when you look at her surroundings. Can you imagine how many women ended up just like her, spending out their short lives in some muddy territory? It’s chilling, and it’s decidedly unsexy. Few Westerns (few films in general, really) ever show prostitution as it really was – a squalid, diseased, and miserable profession that a stranded, single woman had to turn to in order to eat.

And it’s one that a man like McCabe doesn’t trouble himself too much about. He’s repulsed by the feminine realities presented to him by Mrs. Miller, because he only troubled himself about the profits.

When he falls in love with her, he’s annoyed because she sees other men and won’t let him romance her without money in hand.  It’s almost as though he’s been raised on the perky and pretty saloon girls the genre usually employs in place of grubby prostitutes, and can’t imagine why she doesn’t have a heart of gold.

That’s really the thrust of this “revisionist” anti-Western. The American Dream isn’t very dreamy, and McCabe spends most of his time mumbling and bluffing his way to full pockets, childishly unprepared for the realities of the West.  He’s the kind of man the frontier broke, the kind politicians and mythology unconsciously mock when they praise the men and women who pulled themselves up by their bootstraps and produced you or I.

As I said, this isn’t a particularly enjoyable movie.  But it’s a very real one, and portrays the West in a unusually tangible way. You really feel the snow, the wind, the mud, the misery, and the violence. You’ll wish for John Wayne or Clint Eastwood to come and save the day.

There’s a very good and childish reason Hollywood has turned to the mythology again and again.  No one likes a sad story or a “downer.” You only need one McCabe and Mrs. Miller to tell it like it was.

McCabe and Mrs. Miller is available on DVD and Blu-ray as well as various streaming services.