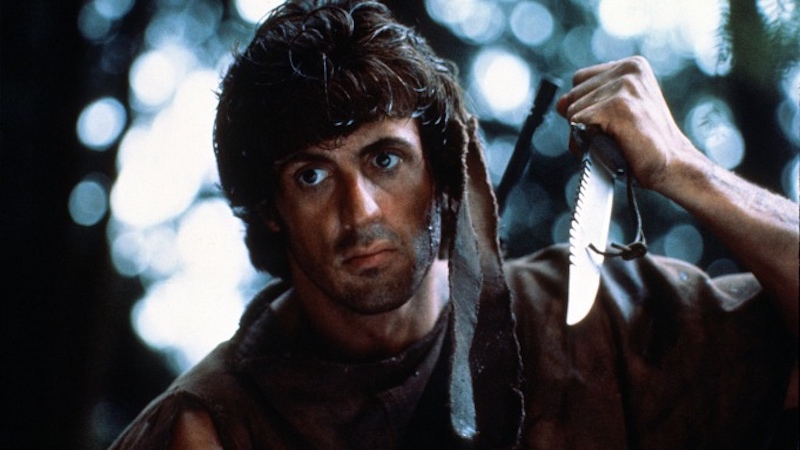 First Blood is based on author David Morrell’s 1972 novel about a Vietnam veteran trying to adapt to civilian life after his horrific experiences during the war as a member of an elite special forces unit. Kotcheff’s film serves as a study of the psyche of veterans and shows the audience the harsh realities many were still facing long after they’d come home.

As the film begins Rambo is a man haunted by his past backpacking through the Pacific northwest of the United States in search of an old Army buddy. Rambo arrives at his friend’s home to discover he’s been dead for over a year due to cancer from exposure to Agent Orange, a defoliant used by the U.S. military during the war. Realizing he’s the last surviving member of his unit and with nowhere to go, he hits the road and ends up in the town of Hope, Washington.

When Rambo enters the town, he is spotted by the town’s sheriff Will Teasle (Dennehy) who asks Rambo where he’s headed, and why he’s passing through. Teasle offers Rambo a ride and escorts him to the city limits. Rambo asks Teasle why he’s against him trying to find something to eat in town.

Teasle explains that he is the law and that he’s paid to keep drifters out. Once dropped off at the outskirts, Rambo begins to head back into town. Teasle arrests Rambo for vagrancy, resisting arrest, and for carrying his signature knife.

The film has excellent pacing and the scenes leading up to Rambo’s escape from custody are impressive. While being processed at the police station, Rambo is brutalized by Deputies Art Galt (Jack Starrett), Ward (Chris Mulkey), and Mitch (David Caruso, in one of his first film roles) who despise Rambo’s silence and contempt for them.

Teasle orders his men to clean up Rambo for a court appearance.The deputies restrain him and begin to dry shave him. Rambo begins to have a flashback to when he was tortured in Vietnamese POW camp. He breaks free from custody, commandeers a dirt bike and leads the police on a chase into the mountains. Jerry Goldsmith’s legendary score is magnificently played throughout these amazing scenes.

Loose in the wilderness, Rambo is hunted by Teasle and his posse of deputies. What they don’t realize is that the man they’re facing is a decorated Vietnam vet who is a Congressional Medal of Honor recipient and is an expert in guerilla warfare. One by one, Rambo ambushes the deputies and horribly maims them with booby-traps. Rambo ambushes Teasle and tells him “Don’t push it…or I’ll give you a war you won’t believe. Let it go!” Rambo then disappears into the forest.

Teasle calls in the state police and National Guard units to go after Rambo. It is at this time that the audience in first introduced to Col. Trautman (Crenna), Rambo’s former CO and a re-occurring character in part II and III. Trautman is amazed and stunned that Rambo let Teasle and his men live. Trautman tries to convince the police and National Guard to let Rambo go and to pick him up somewhere else, to diffuse the situation and to not allow anyone else to be hurt or killed. Teasle confronts Trautman and believes that Trautman is only there to safe himself from public scrutiny.

Trautman tells Teasle that if he sends any more men in they’ll be killed. Teasle proclaims, “Are you trying to tell me two hundred men against your boy is a no win situation?” Trautman says, “If you send that many men up against Rambo just remember one thing . . . a good supply of body bags.” I’ve often wondered how many takes they had to do in order for Crenna to say it with such believability.

The rest of the film is fueled by total machismo and Goldsmith’s score, as Rambo escapes one ambush after another and takes his vengeance out on the town which rejected him, an allegorical expression of what many vets felt as they returned back to the world and were met with hostility and hatred by their fellow countrymen who were sick and tired of an unpopular war which was un-winnable.

Rambo clandestinely enters the town with a stolen Army deuce and a half truck, procures an M-60 machine gun and tears up the town by severing electrical and telephone lines, sets fire to a gas station, and blows up a gun store with cases of black powder.

The final scenes of the film differs from Morrell’s novel. In the book, Trautman puts a gun to Rambo’s head and kills him. In the movie, Rambo is captured and led away in cuffs . . . living on to fight another day. Clearly, Hollywood saw the potential in the film and the charter and wanted to make sure sequels were a possibility. Of course, it worked out and Rambo became a huge international success and a franchise spanning five films to date and grossing almost a Billion dollars.

First Blood was shot on a budget of $14 Million and grossed over $120M at the box office. The success of the film brought a sequel three years later where Rambo goes back to Viet Nam to rescue POWs. A theme that was popular at the time and the subject of other films like 1983’s Uncommon Valor, also directed by Kotcheff.

First Blood is available on DVD and Blu-Ray and on various streaming services.