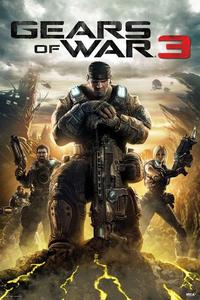 Since its release back in 2006,  the Gears of War series has been met with both fanatic praise and scornful rejection. Some boast that it “redefined the third-person shooter,” while others claim it only furthers the stereotype of gamers as meat-headed blood junkies. Whatever your stance on the franchise is, the third and (possibly) final chapter of the trilogy is here – and credit must be given where it’s due.

The development team at Epic Games end the story of Marcus Fenix and the rest of Delta Squad with a bang – both in the single-player / co-op campaign and across the online battlefield. From graphic updates to fine-tuning combat controls to completely redesigning one of the most popular multiplayer modes in recent history, all of the pieces of this blood-spattered puzzle fall gloriously into place.

Keep reading to find out how Gears of War 3 stomps on the juicy insides of its predecessors, while also managing to deliver one of the most satisfying ends to a gaming franchise.

When the original Gears of War was released, some would argue that it redefined the way third-person shooters were designed. It took standard-fare weaponry and duct taped chainsaws to them. It integrated cover into combat in a way rarely seen before, which has now become the norm for any over-the-shoulder action title. It changed a lot back in 2006, not only with new mechanics, but also by offering exceptional competitive multiplayer and one of the best cooperative experiences on the market – and honestly, not much of that has changed since then.

Cover-to-cover movement is still heavily emphasized in Gears 3, ammo still comes in glowing blue crates, and of course the Lancer still has it’s chainsaw bayonet attached to the front. While it may seem at first that the Epic team has been resting on their laurels, they haven’t – they’ve been fine-tuning an already successful gameplay system and making it even better. While the basic controls are essentially the same as they have been for the last two titles, everything feels tighter and smoother. Shifting from one chunk of concrete cover to the next is faster, hunkering down into a sprint transitions quicker, and the ability to maneuver around the battlefield has become incredibly streamlined.  Terrain that would have once taken an entire boss fight to traverse is now sprinted and clambered over in a matter of seconds – which is good, because the baddies in GoW3 are bigger and nastier, and there’s more of them than ever.

For those of you who aren’t familiar with the series, in Gears 2 the Locust (those giant monster-looking guys you spend the whole game shooting) are in the midst of a civil war with “The Lambent,” essentially Locust who have become infected with the nuclear-like power of immulsion flowing beneath the planet’s surface. We’ll get into greater detail with that further on, but the big problem that arises here is that when you shoot them, they don’t just die – they  mutate and explode. You’ll need to aim carefully in this installment, because the old ‘spray-and-pray’ strategy that was so popular in previous titles will only lead to you getting yourself killed. Ammo is less plentiful in this go around as well, which creates the need for you to vary your aresenal and rely more heavily on melee combat – often resulting in hilarious showers of red / glowing goo. The online aspect so prevalent in the Gears trilogy also returns here, and it too has gotten the six-million-dollar-man treatment. Most of the old competitive multiplayer modes return, with Team Deathmatch and King of the Hill at the front of the pack. New modes have also been added, including one called Capture the Leader: wherein one player on each team is designated ‘captain’ and cannot be killed; rather they must be downed and held hostage for 30 seconds to win the round. Horde mode, made famous by its addition in Gears of War 2 returns, and has gotten a full and complete overhaul. Players now have the ability to purchase weapons and build / upgrade turrets and barricades between rounds. This comes in especially handy every tenth round, as new ‘Boss Rounds’ have been added – pitting you and your friends against the behemoth monsters from the campaign (in addition to regular enemies).  Also included is ‘Beast Mode,’ which pits you as one of many Locust troop types attacking a group of human opponents. Compared to the problematic multiplayer from Gears 2, the online component of this installment is a much appreciated step up.

Up until now, the story in the Gears trilogy hasn’t been overly complex or thought provoking. The first game offered a sparse plot as an excuse for the player to mercilessly slaughter wave after wave of hapless enemies. The sequel jumped to the opposite end of the spectrum, with each advancement in story becoming more and more ridiculous. In Gears 3, however, the development team has managed to bring the best of both worlds together and create a solid and emotional storyline – that still gives you reasons to turn everything you see into a pulpy mess.

The story begins two years after the events of the second game, and morale for humanity is at an all-time low. The government has disbanded in the wake of Locust attacks, and there seems to be a distinct lack of hope for our species. Things go from bad to worse when the city-sized ship carrying the remains of the military comes under attack – just as series hero Marcus Fenix is tasked with finding his thought-to-be-dead father to help him cure the Lambent infection plaguing both humans and Locust alike.

While the plot itself isn’t revolutionary by any means, and there are still a few questions left unanswered at the end of the game, this manages to be the most compelling tale in the Gears saga. This isn’t a result of elaborate twists and turns, or overly brilliant dialogue (while the writing through most of the game is decent, there are some face-palmingly bad one-liners); rather it’s in the sense of comradery developed early on between the characters,and continued throughout the game. The consequence of failure feels more immediate than it ever has, and we truly get a sense of who these people are, as opposed to just controlling roided-out freaks with huge guns.

One instance in particular showcases fan favorite Augustus “Cole Train” Cole reliving his former days as a superstar athlete. While this could have been cast aside as an overly campy sequence, it instead provides a very moving glimpse into who Cole is as a man . It shows us the lives that these characters once led, and what might have been, were it not for the incredibly dire circumstances they find themselves in now. That is what the plot of Gears 3 ultimately boils down to: it is not about Marcus getting over his daddy issues. It’s not a quest for vengeance, nor redemption. It’s a story about hope, and finding a way to keep it alive.

When gamers think of “beautiful violence,” they think about the Gears of War games. Each title has been a symphony of gunfire, explosions, and chunky red stuff flying all over the screen. While the environments may have all been similar and seemingly used only four colors in the palate, players were willing to forgive them after experiencing the satisfaction of pulling off a headshot and being rewarded with flying bits of blood and skull – and the satisfying crunch that accompanies it.

The combat in GoW 3 is no different – every rifle shot fired sounds like a cannon, explosions test the decibel limits of your sub-woofer, and chainsaws ripping through bad guys look and sound so good that I think I might need therapy (because like it so much).  Steve Jablonky’s score is appropriately bombastic, and the recurring variations of the main theme serve each encounter and cutscene well.

Environments also get a nice facelift in this installment. In previous games, settings consisted of rusted metal and concrete or stone and dirt. Here, we’re treated to expansive and varied locations that all have their own unique look and feel. From destroyed cities covered in ash to a tropical island paradise, these are the brightest and most diverse environments we’ve seen to date in a Gears title. While the framerate may chug a little bit when a ton of enemies show up, and some collision detection bugs exist (Test: punch a wall as hard as you can. If your hand doesn’t go through it, congratulations – you don’t live inside Gears of War), the graphics look fantastic and the game runs smoothly 95% of the time.

Gears of War 3 brings the trilogy to a fitting end, and takes its place as the best game in the series. The fundamental gameplay that made the original such a landmark success is still there, and it’s been improved to near perfection. While it doesn’t let you pilot around Brumaks or cut open giant worms from the inside, that isn’t necessarily a bad thing. Taking a step back from the ridiculousness that was GoW 2 was a smart move on Epic’s part, and the character-driven campaign is better for it. The online aspect of the game has been revamped and improved, proving itself far less infuriating that its predecessor, and the on-or-offline cooperative game modes are a real blast to play.

Whether you’re a fan of the series or not, this is definitely a title worth experiencing – if only to see how subtle changes and additions can drastically improve a franchise. While this may not be the final title in the Gears of War canon, it’d be a damn fine note to go out on.