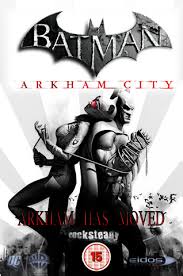 Warner Interactive and DC Comics announced today that as of November 1st, gamers will be able to download Nightwing as a playable character in Batman: Arkham City. The downloadable content pack will run for 560 Microsoft Points ($6.99 in the PSN Store), and include two new challenge maps – Wayne Manor and the ‘Main Hall’. Nightwing, much like the downloadable Robin character, will come with his own unique weapons and gadgets to put to use against the thugs in Arkham City.

In keeping with the ‘bonus skins’ available, the Nightwing DLC will also contain an alternate Animated Series character model. It was also announced recently that the pre-order Robin bonus (granted to those who reserve the game at Best Buy) will be available to the masses on November 22nd for the same price.

Aside from a robust amount of downloadable goodies, it has also come to light in the past few weeks that the cast of Arkham City will be much larger than some may have expected. While villains like The Penguin, Two-Face, Mr. Freeze and The Riddler have all received their own trailers, many of Batman’s foes within the game have yet to step fully into the spotlight.  It has been confirmed that, in addition to all of the above, the following members of the Rogues Gallery will appear in-game: Calendar Man, Poison Ivy, Solomon Grundy, Bane, the Mad Hatter, DeadShot, Talia Al’Ghul, Black Mask, and of course, Prof. Hugo Strange.

Check out the gallery after the jump for the images and videos released so far for the new heroes and villains of Batman: Arkham City – available October 18th, 2011.