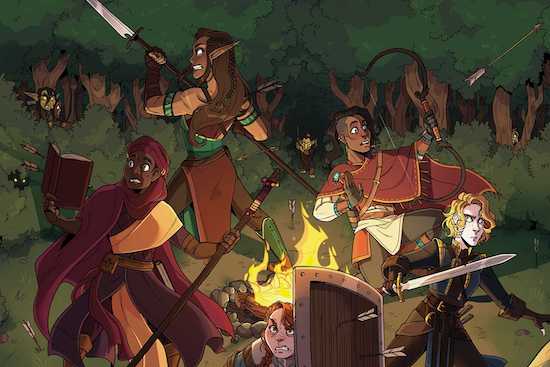 We’re starting another new series here at The Flickcast. This time around it’s all about books with the first edition of What We’re Reading. So, what are we reading? Today, it’s some helpful D&D books from author Keith Ammann.

These helpful D&D books are The Monsters Know What They’re Doing: Combat Tactics for Dungeon Masters and Live to Tell the Tale: Combat Tactics for Players. We know, those titles are kinda long, but they’re really good books, so we won’t hold it against him. In fact, the info in these books is so helpful and useful, we don’t mind if he uses twenty or thirty words for the title of his next one!

Moving on, you can probably guess these D&D books deal with various aspects of playing Dungeons & Dragons, especially combat. The first, targeted at Dungeon Masters . . .

“. . . lightens the DM’s burden by helping you understand your monsters’ abilities and develop battle plans before your fifth edition D&D game session begins. Just as soldiers don’t whip out their field manuals for the first time when they’re already under fire, a DM shouldn’t wait until the PCs have just encountered a dozen bullywugs to figure out how they advance, fight, and retreat.”

It really helps DM’s get inside the minds and motivations of NPC’s and creatures in the game. It also makes combat encounters more realistic and fun. Sounds great, right? We’ve used it during many of our games with great success.

The second book is targeted at players and deals with their mindset and tactics during combat. It’s . . .

“. . . an introduction to combat tactics for fifth-edition Dungeons & Dragons players, Live to Tell the Tale evens the score. It examines the fundamentals of D&D battles: combat roles, party composition, attacking combos, advantage and disadvantage, Stealth and Perception, and more…including the ever-important consideration of how to run away!”

It also offers several combat scenarios featuring character and monsters of increasingly higher level. This helps to better illustrate the tactics of each character class, abilities available at various levels, what to do with them during combat and the roles each class can play to help ensure combat success. It’s pretty cool.

If you’re a D&D player, Dungeon Master (or both) and you want to improve your games, especially during combat, give these books a try. You’ll definately learn something. We sure did.

You can find these books at Amazon, or your local bookstore. We get a lot of our books at Book People, which is one of our favorite local shops here in Austin. Please support local bookstores when you can.

Keith’s next book, featuring more combat tactics and monsters from Volo’s Guide to Monsters and Mordenkainen’s Tome of Foes, is available for pre-order now. And in addition to the books, you can get more insights and info over at his blog.