Trailer Time: ‘Army of the Dead’ 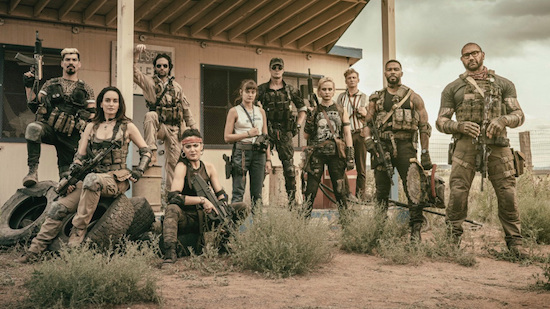 Welcome back to another edition of Trailer Time.This is the place where we post interesting trailers for movies, television shows, games and more. For this installment of Trailer Time we’ve got Zack Snyder’s upcoming zombie heist opus Army of the Dead.

The film, which hits Netflix on May 21st, finds Snyder returning to the world of zombies for a heist film set in Vegas against the backdrop of a zombie apocalypse. The heroes must complete their heist while also fighting and surviving against, well, an army of the dead. Okay, we’re interested.

And say what you will about Snyder’s other work (trust us, we have), but at least his films aren’t boring and are often very entertaining. Also, they usually feature good action, striking visuals and even a decent performance or two (we kid, we kid). This one looks to be no exception.

Army of the Dead features an ensemble cast including Dave Bautista, Ella Purnell, Ana de la Reguera, Garret Dillahunt, Theo Rossi, Tig Notario and Hiroyuki Sanada. It’s directed by Snyder from a script he wrote with Shay Hatten and Joby Harold, based on a story by Snyder.

Check out the trailer below. Look for Army of the Dead on Netflix May 21st.

What do you think of this trailer for Army of the Dead? Is there a trailer for an upcoming project you’re most excited about? Let us know in the comments or hit us up on Twitter, Facebook or Instagram.