Revisiting John Huston: In This Our Life

Revisiting John Huston: In This Our Life 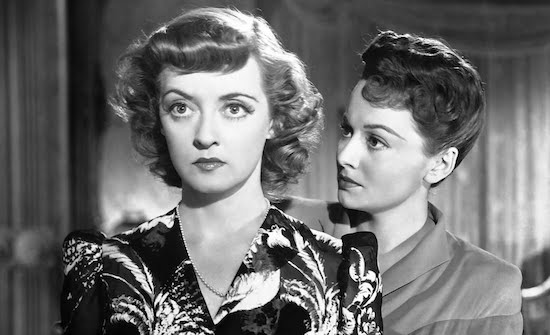 It’s time for another edition of Revisiting John Huston. This week it’s the 1942 film In This Our Life.

Huston’s second film, In This Our Life seems to be somewhat lost to history, and, coming after The Maltese Falcon, that’s understandable. I’m not sure what the prevailing mood was in the ‘40s, but if a director were to offer a similar follow-up today, I imagine that more than a few critics would likely be salivating to label him a one-hit wonder.

That’s not to say that In This Our Life is a bad movie, it’s just okay. The story, adapted from the Pulitzer-Prize-winning novel about two sisters, one good, Roy (Olivia de Havilland), one bad, Stanley (Bette Davis). The significance of their masculine names is unclear.

Roy is married to Peter, a doctor, while Stanley’s engaged to Craig, a lawyer. However Peter’s carrying on an affair with Stanley. The night before her wedding, Stanley elopes with Peter, who subsequently divorces Roy, leaving her and Craig to find comfort with each other, and the two eventually get married.

So, Stanley and Peter = bad; Roy and Craig = good. Rounding out the dichotomies are William, the girls’ racist, hard-drinking uncle, who harbors a rather disturbing crush on and shares an incestually suggestive relationship with his bad niece (the scene where she greets him with a flurry of tickles and he mentions the “present” in his pocket is only one among many that tiptoe the censor’s pen), and Asa, the girls’ kindly father.

The opening credits, set against a painting of a live oak, recalls this shot from Gone With the Wind, and when the names Olivia de Havilland and Hattie McDaniela appear, I started wondering whether this was, indeed, Warner Bros.’ response to the 1939 classic.

I’m still not quite sure. In This Our Life is set in the present and features a number of contemporary popular songs, including “South American Way” and “Java Jive”; the themes are seedier and at times seem little above sensationalistic; and the character of Parry, the young black man who works for Craig and aspires to become a lawyer himself, is a good deal ahead of its time and shares little in common with some of more stereotypical black roles in GWTW.

But de Havilland plays essentially the same good-natured wife all but oblivious to her sister’s designs on her husband (both Peter and then, later, Craig); Stanley shows some of the worst shallow/social-climbing aspects of Scarlett; and her husband Peter likewise becomes disillusioned with their marriage, finding solace in drink until his frustrations reach a boiling point and explode in rage and abuse.

Still, even though these similarities are superficial, they seem intentional. Again, the casting of de Havilland has to be deliberate, and Davis, of course, was in consideration for Scarlett O’Hara, and the mustached George Brent bears more than a passing resemblance to Clark Gable’s Rhett (the two names “Craig” and “Rhett” even sound the same).

However, the bulk of the film doesn’t focus solely on Stanley as GWTW does on Scarlett. Stanley’s life spirals out of control while Roy’s blossoms. Stanley never matures as Scarlett does, and de Havilland’s character Roy evokes something more like admiration rather than Melanie Wilkes’s pity. So there are some distinct differences, but I suspect the studio welcomed the commonalities.

The second half, however, is in a very different tone, dropping the sister versus sister drama once Stanley drunkenly mows down a mother and her daughter, injuring the latter and killing the former. The police track down her car, but Stanley shifts the blame to Parry. Naturally Parry’s picked up despite the only evidence being Stanley’s word. Trapped by her own deceit, Stanley melts down, snapping at her family like a wounded dog and burning more bridges than Sherman’s March to the Sea. I have to say, Davis is superb.

In a film where all the characters save Stanley and her grotesque Uncle William are rather bland and wooden, and with a scant two or three first-rate scenes—mostly between Davis and Charles Coburn, whose only redeemable moments suggest a much darker ulterior motive—Davis makes it watchable, and her performance in the last 20 minutes is a tour de force that makes me wish she were alive and well today, playing a similar role in the latest Coen Brothers’ masterpiece, because she’d be right at home (and given In This Our Life’s themes of gold-digging, incest, and self-destructiveness, I can’t help but wonder if ITOL is a favorite of theirs).

In all, there’s certainly a heavy emphasis on the darker side of humanity that pervades all of Huston’s films, but little of the depth. Coming in at 97 minutes, it nevertheless feels rushed, and I can’t help but wonder if the reason for that was because Huston had to leave the production following America’s entry into World War II.

Apparently the film was completed by Raoul Walsh, whose fights with Davis caused further delays. It’s too bad, because I wonder that if Huston had been kept on the film could have been another masterpiece. Instead, I suspect that for anyone else who happens upon it, they’ll regard it as his Magnificent Ambersons.

Next time (providing I can get ahold of them all), I’ll be focusing on the three documentaries Huston made at the request of the U.S. government, Report from the Aleutians, The Battle of San Pietro, and Let There Be Light. These three tend to be rather short (and perhaps not as timely, given their nature), so I’ll covering all three in one post—and the fact that it gets me to Treasure of the Sierra Madre all the sooner has little to do with that decision.

In This Our Life stars Bette Davis, Olivia de Havilland, George Brent, Dennis Morgan and Charles Coburn. It’s based on the Pulitzer Prize-winning novel by Ellen Glasgow, adapted by Howard Koch, and directed by John Huston. Look for it on the various streaming services or on DVD as part of Warner Bros. Bette Davis Collection.