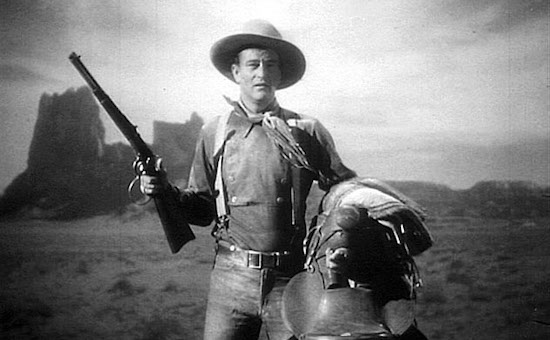 I thought this week’s selection ought to be about the necessity of speed and keeping to a schedule. As I have managed to go through my 20-odd years without having seen John Ford’s Stagecoach, what better pick could there be?

But even if you haven’t seen Stagecoach, you know it. At its center is a classic Western image — the howling Indians shooting at a racing stagecoach, exchanging shots with frantic passengers — and its plotline has been used a thousand times over.

A motley group of people are thrown together, and eventually become fast friends because their lives could end at any moment. Through the lens of the eternally optimistic Ford it becomes a miniature version of the American promise, a magical West where even an outlaw and a prostitute can find redemption and a better life.

This is the first collaboration between Ford and Wayne, who had made a reported 80 films up to that point, but wasn’t a star. This film changed that and even the most jaded movie watcher can see why. When Wayne first appears on camera (and the shot is illustrating this post), it’s breathtaking.

Whatever your thoughts on Wayne and later revelations about his life and beliefs, at this moment in history It’s the birth of a screen legend. Two legends, if you want to count Ford, who clearly saw what no director or studio had.

The film is also full of wonderful character moments. Some of my favorites have to be the intensely sexy moment between Wayne and Claire Trevor (I’m half convinced she’s holding a baby only for censorship reasons) a chase sequence which is as fresh today as it was back in 1939, and one of the most throwaway gunfights I’ve seen in this genre yet.

If you can’t find it in yourself to watch it for Wayne or its groundbreaking place in cinema history, then you must watch it before you travel. You may think the romance of travel ended with TSA, shoe removal or COVID. But Stagecoach is a timely reminder that other eras may have had it worse.

Compared to unpaved roads, cramped conditions, bean dinners, and the possibility of scalping, carry-on restrictions, screaming babies and mask mandates don’t seem so bad. Of course, if you are going to travel, especially these days, be safe. And take Stagecoach with you on the trip. You’ll enjoy it.

Stagecoach is available on Blu-ray and on various streaming services.