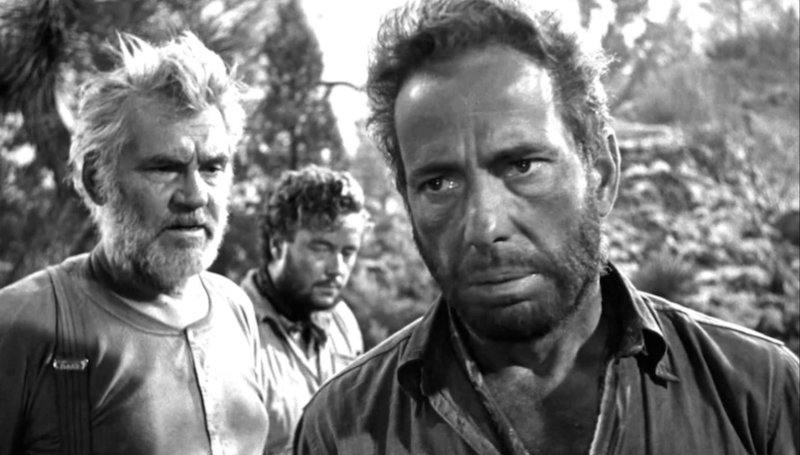 It’s time for another edition of Revisiting John Huston. This week we’re talking about Huston’s 1948 masterpiece Treasure of the Sierra Madre. Let’s get into it.

After The Maltese Falcon, Treasure of the Sierra Madre is probably Huston’s most famous film. The two probably vie for the title of best known. It’s a great movie in the sense that The Godfather and Casablanca are great movies: memorable characters, rich in themes, steep in action, imminently watchable.  The kind of “old” movie for people who don’t like “old” movies.

I doubt anyone reading this won’t know the plot, but just in case, let’s talk about it. Humphrey Bogart plays Fred C. Dobbs, an out-of-luck drifter settled like dirt in one of Mexico’s dirtiest towns. He meets up with fellow drifter Bob Curtin (Tim Holt), and the two try to pick up odd jobs with even less luck than they started with.

After taking brutal revenge on an employer who stiffed them, Dobbs and Curtin meet up with the grizzled and half-mad Howard (Huston’s father Walter, in an Oscar-winning role), a seasoned prospector looking for some men to share the costs of an expedition to mine for gold.

The three team up and head for the wilderness. Soon after, it’s clear that Howard is the most valuable member of the outfit, able to recognize Fool’s Gold and find the real stuff where the others see dust.  He’s also the mediator, picking up early on the paranoia and greed that will eventually lead to Dobbs’ ruin.

At first Howard’s placating, going along with Dobbs to stave off his growing insanity. But as Dobbs’ mental instability increases, Howard becomes warily assertive, suggesting that stop while they’re ahead, planting suggestions in Dobbs’ head, and eventually convincing the group to pull up stakes and quit while they’re ahead.

When I first came back to the film after seeing it years ago, the character of Howard struck me as a first-rate candidate for a paper on behavioral studies and decision-making. The way he subtly becomes the leader who keeps the group together while consistently downplaying his role to elude confrontation made him the most interesting character for me. Of course, any such study would devalue the film, but it’s worth mentioning.

In any event, Howard’s a great character, and Huston is perfect for it. Cinema was made for Huston, who can convey so much with just his face (check out the final scene in 1941’s The Devil and Daniel Webster to get another idea), and here you can see how his eyes belie his words as he tells Dobbs “Either way is fine with me.”

It doesn’t seem like much when you first see it, but on repeat viewings, I find myself watching Huston more than any other character. And that includes Alfonso Bedoya as Gold Hat and bearer of the line, “We don’t need to show you no stinkin’ badges!”.

Huston’s performance as Mr. Scratch in The Devil and Daniel Webster is a favorite of mine, but here he’s a bit more reserved, fast talking with his childlike voice. His gritty experience is hidden among boisterous laughs and folksy sayings, yet when he draws his gun to kill an innocent man who’s wandered onto their claim, it’s utterly believable.

And, of course, there’s Bogart. His acting may seem a bit over the top, but the character’s arc is indelibly convincing. How many different shades of Dobbs do we see? There’s the desperate hustler, the solemn mourner when a fellow digger follows Curtin back to the claim and dies fending off a sinister gang of banditos, the cheery dreamer who can’t wait to blow his stake on fancy clothes and women  and finally the deranged madman who dies penniless and broken (spoilers).

Against this backdrop of the darkness men harbor in their souls is a riveting series of fast-paced vignettes: the three face roving thieves, Indians, cave-ins and double-crosses. It’s high adventure that excels in every aspect: the sets, the clothes, the makeup, the unforgettable theme—John Huston had an eye for adventure and knew that the details sell the story.

Treasure was one of the first Hollywood films to shoot on location. Huston mentions in his autobiography that it took the studio heads some convincing it’d be cost-effective. Thank heavens they agreed.

Treasure was the first movie Huston made after his war documentaries, sequentially after the very dark Let There Be Light. While I can’t speak with any authority of how wartime may have influenced the film (the portions of Huston’s autobiography dedicated to Treasure focus more on the production and the mysterious B. Traven, who wrote the novel upon which the movie’s based), the characters seem more refined than Huston’s pre-war films, or at least Bogart’s does.

We never quite know what Spade’s up to, and his character more or less remains the same all throughout The Maltese Falcon, but this is the first time Huston really develops and follows a character. Moreso, he makes his protagonist the villain.

So much has been written before on Treasure I can’t hope to provide too many new insights. The best I can do is try to convince you to see it. And you should. Now.