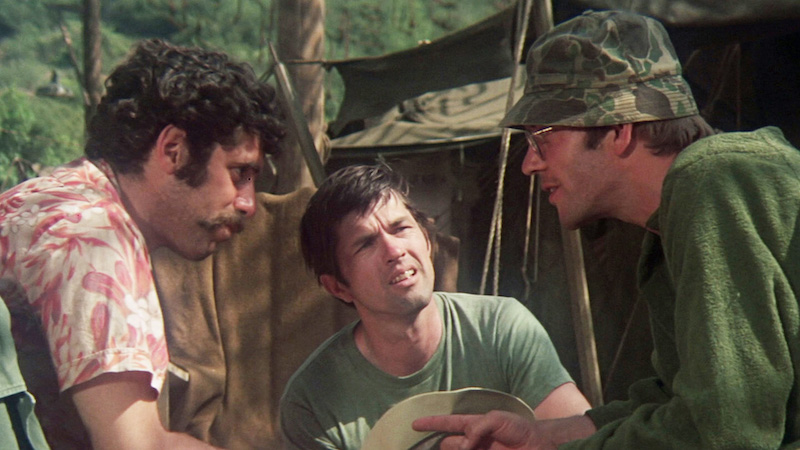 The release of M*A*S*H came at a critical time with America entering a new decade and the unpopular war in Vietnam still raging. M*A*S*H‘s dark humor and side-splitting dialogue is an allegorical look at Korea, yet reflected the country’s attitudes about Vietnam,  which was igniting riots in cities and on college campuses throughout the country.

Robert Altman directs with incredible precision and uses many of his trademarks such as his jump cut edits, scenes which contain multiple conversations which overlap with others, and numerous zooms. If I had to pick some of my favorite scenes it would be nearly impossible, because so many in the film are amazing and make me laugh out loud every time I see them.

One of those scenes is near the beginning of the film where Hawkeye first arrives at the front. He and Duke meet at a depot where they commandeer a jeep from a surly black sergeant who treats the high ranking Hawkeye with insubordination. Hawkeye proceeds to put on his Captain bars while whistling and muttering under his breath, “racist.”

Before they even report to Col. Blake, they enter the mess hall of the 4077 MASH unit and proceed to have breakfast, while flirting with the attractive nursing staff. Col. Blake informs Hawkeye that the jeep that they’ve arrived in was reported stolen. Hawkeye proceeds to tell the Col. that its all just a terrible misunderstanding “Oh no sir, there’s the jeep right over there.”

Blake believes Capt. Hawkeye and has Cpl. Radar change the serial numbers on the jeep and that both Hawkeye and Duke are to report for duty as soon as the casualties begin being flown in from the helicopter ambulances.

Many of the comedic scenes are interrupted with gory scenes of combat victims suffering from an assortment of horrible injuries. Even with death and carnage around them, the doctors still remain their comedic selves while trying to survive the insanity of war. Trapper John’s entrance to the film helps bring the three personalities together.

Sutherland, Skerritt, and Gould have absolute brilliant chemistry with one another. This is most apparent during the scenes where it seems all of them are about to bust out laughing at any moment. I’ve always wondered how many takes Altman and the cast had to do before everyone could regain their ability to get back into their roles. Probably quite a few.

One of these scenes occurs in the tent in which Hawkeye and Duke have taken over after they have had the religious and inept Maj. Burns removed by Col. Blake. The reserved and travel weary Trapper John responds to polite conversation with his new bunk mates in one or two word responses. The puzzled Duke wonders why he should not know where he hales from? Hawkeye can’t place it but he knows that he has met the good doctor McIntyre before.

Hawkeye suggests that the three of them enjoy a nice martini. Trapper asks if there are any olives. Duke informs him that “Where the hell do you think you are?” Trapper then pulls out a glass jar of olives from his jacket to put one in his martini. Both Hawkeye and Duke look on with slack jawed amazement plastered on their faces.

M*A*S*H is the perfect blend of a satirical comedy and terrific drama. I would compare it’s dark humor to that of Stanley Kubrick’s masterpiece, Dr. Strangelove. M*A*S*H has an absolutely amazing cast of characters who are all vying for the best screen time. It is a film that never gets old and one that can be appreciated with every viewing. It definitely ranks among my top ten favorite films of all time.

Other interesting facts about the film: It was one of 20th Century Fox’s highest grossing films of the year. It was nominated for five Academy Awards and took home one Oscar for Best Screenplay. In 1996, it was deemed “culturally significant” by the Library of Congress and preserved in the National Film Registry and it was the first film to feature the “F” word. “Culturally significant” indeed.

M*A*S*H is available on DVD and Blu-ray and most likely one or more streaming services.