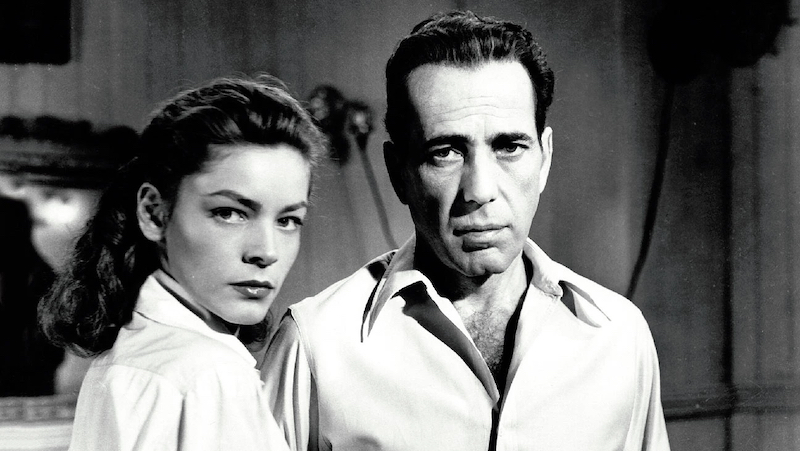 Huston doesn’t give much time to Key Largo in his autobiography, save for sharing his dissatisfaction with Warner Brothers in the late 1940s and some epic stories of his gambling debts. Offhandedly he mentions it was nominated for Best Picture and Claire Trevor won the award for Best Supporting Actress.

Huston also mentions Edward G. Robinson’s reluctance to take on another gangster role, having played so many of them in the past. However, there is a spot-on description of Robinson’s first scene in the movie, where he’s soaking in a bathtub and smoking a long cigar: “He looked like a crustacean with its shell off.” To put it succinctly, it’s perfect.

But despite Huston’s seeming reticence to talk about the film , Key Largo is still very fun. Not as deep as The Maltese Falcon, but not quite the bang-out, mindless entertainment of Across the Pacific.

Based on the play of the same name (I would use “eponymous,” but I don’t want to sound like a snob) by Maxwell Anderson, Largo stars Bogie as WWII veteran Frank McCloud. He’s made a trip down to the eponymous Key Largo to seek out the father (Lionel Barrymore) and widow (Lauren Bacall) of a former war buddy.

The two run a small bar and hotel, which exiled gangster Johnny Rocco (Edward G. Robinson) has chosen to make the headquarters of his gang before reclaiming his former empire. Tensions mount between Rocco and his men and the hoteliers, with McCloud caught in the middle…

With its dearth of locations, it’s not surprising this was based on a stage play. Huston was apparently not a fan of Anderson’s work. He notes that his and co-writer Richard Brooks’ script was dramatically superior to the source material, and, at least according to Wikipedia, Huston’s dislike went deeper:

The film script was heavily changed from the play. John Huston was so angered at the deficiencies in the play that he barred producer Jerry Wald from the set of the film. It was believed that Huston was in a rage over the House Un-American Activities Committee (HUAC) hearings and didn’t want to adapt a play by a reactionary who hated Franklin Delano Roosevelt.

I’m a bit suspicious of that last line, as I remember reading on the back of the box of Dad’s VHS copy that Lionel Barrymore was also a fervent Roosevelt hater despite his character being an obvious stand-in for the former president. Apparently, Barrymore delivered his lines through gritted teeth. It seems odd that Huston would cast another anti-Franklinite. (And in case you were wondering, back-of-the-VHS-box trivia trumps Wikipedia…though both are slightly above Entertainment Weekly.)

Key Largo’s less gritty than a lot of other A-list Huston works (the gunplay’s a tad melodramatic), but some moments do stand out: Robinson’s slapping of Bogie is abruptly brutal for a scene of light violence, and Claire Trevor’s portrayal of Rocco’s alcoholic moll stands up with the best and most tragic performances Huston ever shot.

But the picture belongs to Robinson, who’s at the top of his sleazy game. His most famous performance was as Rico in Little Caesar, but how many people still watch that, and how many continue to enjoy Key Largo? Robinson seems to exist in that strange void between character actor and lead.

He was a wonderfully versatile man. Remember he played the good guy in Double Indemnity and the sympathetic Sol Roth, partner of Charlton Heston’s Detective Thorne, in Soylent Green. But whether he liked it or not, his talent for playing the bad tough guy was unmatched. His performance as Rocco embodies all the gangster clichés he invented (by the end I was half-expecting to exit with the line, “Is this the end of Rocco?”), but he sells it by suggesting even more.

We never hear about his past with Trevor’s Gaye Dawn other than she used to be a singer and is now a wreck of a woman who wears too much makeup and can’t carry a tune. We don’t need to. The intensity of the actors says it all, and in the best scene of the movie, Rocco reneges on his promise of a drink for one of Gaye’s songs.

“You promised!” she pleas. “You were lousy.” He sneers. She lurches to a chair while he looks on, and in one of the great moments of heroism, Bogart mixes her a cocktail. She’s too far down the road to destruction, and McCloud’s merely offering euthanasia.

Largo, and Huston, are at their best in scenes like these, which overshadow the rest of the film. Bogart and Bacall do well, but there really isn’t much for them to do other than stand around and coo at one another, and Barrymore’s James Temple suffers from being too much of a heroic Roosevelt stand-in—the fearless cripple who’s not afraid to blah, blah, blah.

But again, it’s fun. Thrillers that rely on words instead of action are tough to pull off on film. At least on stage there’s the energy of the moment, but Huston has first-rate actors, a very good script, and an exotic location, which makes for a fast-paced, eminently watchable flick. It’s not A-level Huston, but it’s not B-level either. Maybe B+…or A-.

Look for Key Largo on DVD, Blu-ray and the various streaming services.