As I was reading all about the controversy surrounding Hit-Girl in the movie Kick-Ass, I wondered why all this hullabaloo? There have been a ton of sidekicks in the past that no one has said boo about. My favorite sidekick of all time, is also the first in comics: Robin, the Boy Wonder.

Robin was a sweet, acrobatic kid until he was trained to be a super-soldier by his caring and crazed “parental guardian” Batman. Albeit, he didn’t kill, but he still had bullets whizzing by his head. He was captured every other week and the Joker even killed one version of him.

Where was the parental outcry for my beloved Boy Wonder then? Instead of my dad decrying the shoddy parenting skills of Batty, he crafted a bat cave out of our sewing room, devised numerous bat-inspired gadgets for our utility belts, and together we trolled the streets of the cul-de-sac in search of evil.

In between ridding the streets of crime by returning a lost cat back to our neighbor, I read copious comic book adventures and looked forward to seeing a kid thwart crime on the mean streets of Gotham. It’s a wonder Robin has survived at all. His mentor, old Bats is a little Batty himself. He’s either sleeping at the office, obsessing in his bat cave over the latest baddie, or being all angsty, dark, and solemn.

The only time he does pay attention to Robin is when he trains him as a soldier to fight crime in grungy alleys. Not exactly, a nice afternoon in the park. Especially since the “superhero” by Robin’s side refuses to carry a gun against super-villains who have many distinct plans on how to torture and kill them. If I was Robin facing a coo coo for CoCo Puffs super-villain, I would certainly be packing a boatload of ammo and not be afraid to use it.

Is the fact that Hit-Girl is the cutest little girl you’ve even seen incense the adults who view it? If she was a boy, would there be less heat? I mean boys will be boys right? Little boys fight each other constantly.

They are given toys in the form of guns, tanks, rapid-fire missiles, crossbows and the like. Even when boys are banned from toys of mayhem, it doesn’t stop them. My own nephew secretly constructed weapons and used them in surprise Ninja attacks against his unsuspecting and loving Nana.

Maybe parents are so used to seeing commercials of boys in combat, that they are shocked when little girls take up the fight. Hey, little girls are supposed to dress up Barbies, wear a lot of pink, and sing Miley Cyrus songs about the perfect prince of their dreams.

As a child, I was a girl who played equally with my Barbies as I did with my Justice League of America action figures. In fact, I would often have action figures and Barbies battle it out in an ultimate fight that would usually end with a sweet pool party at the Barbie dream house.

Hit-Girl was not the first girl to fight the forces of evil. Many other girls have donned symbols of light and crusaded in dark alleys until dawn. Is Hit-Girl really the most Kick-Ass, or do these girls give her a run for her money? 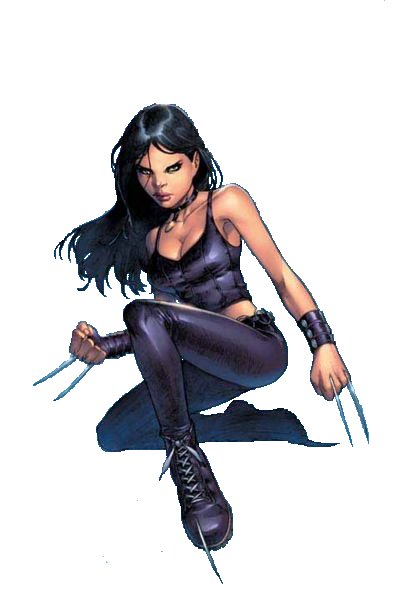 Why She Needs Therapy: Created as a 23rd clone of Wolverine, she was never treated as human, but rather as the ultimate weapon. She was even forced to kill the only mother she knew. On a scale of 1 to 10, I put her whacked-out issues at 23.

Girl Power: All the powers of Wolverine in a petite, girl package. Did I mention she has a claw in each foot? Oh, I forgot? Yeah, she forgets to mention it too right before she puts said claw into a bad guy’s derriere.

Combat Boots and Tiaras: Who says you need armor? Refusing to dress in colors resembling a brightly colored target, she usually wears a black halter and black stretchy pants with some killer boots that have a slit for her foot claws.

Most Kick-Ass Moment: Although brainwashed strictly to follow kill orders, she amazingly breaks free and thinks for herself. After her mom tells her the truth, she uses her free will to destroy the doctors, lab, and pods of super government killers all by her lonesome. Who needs the help of a superhero team when you have a healing factor and a killer set of boots?

Why She Needs Therapy: Rescued by Wonder Woman as a toddler from a burning building which killed her mother. She may miss her mom, but bracelet-wearing female role models abound in the land of the Amazons.

Girl Power: Like all the DC heroes, she’s had many variations. However, she was given the standard, unoriginal powers of superhuman strength, endurance, speed, and the power of flight. I’m bored already.

Most Kick-Ass Moment: Intent on causing trouble, a super-villain by the name of Angle Man stumbles upon her path. He immediately falls in love with her and drops his weapons. Later he asks her for help in defeating the Cheetah. Take that- superheroes.

She doesn’t even need to fight, super-villains realize she is way more awesome than they ever could be and she wins by default. Why She Needs Therapy: Born from super-villain parents, she was whisked away before her parents completed their ritual sacrifice of a young girl. The next year, she saved a girl from the same ritual and realized her parents didn’t exactly fight on the side of angels.

Girl Power: Superhuman strength and invulnerability, blah, blah, blah. But in her case, she needs a power nap after all that ruckus. A kid who wants to take a nap? Parents should take the hint and give these comics to their sugar-hyped munchkins.

Some say she also has hidden intellect and manipulative skills, I wouldn’t call this a superpower as my niece has the same attributes.

Combat Boots and Tiaras: Refusing to wear brightly colored spandex, she instead is best known for her on-trend anime inspired hats. I vote her the most cute and style-conscious by far.

Most Kick-Ass Moment: During one adventure in a church, she finally gets to meet her crush and champion- the hairy and gruff Wolverine. Wolverine yells at her for something that isn‘t even her fault, and instead of crying she hurls him out of the church and knocks him on his ass. She has done what Cyclops has thought about doing for many years. Molly 1, Cyclops and Wolverine 0.

Why She Needs Therapy: She stands out from the crowd for not needing some horrible incident to assume the mantle of crime-fighter. She fought crime because she wanted to make a difference. How enlightening. And the thanks she gets? A bullet in the back from the Joker.

Girl Power: She doesn’t need any powers. She has trained herself, designed her own utility belt, her own bat-vehicles, and her own missions. She is truly an independent woman way before the likes of Destiny’s Child. Even paraplegia couldn’t stop her.

Combat Boots and Tiaras: I take numerous points away from her for her likeness to Batty’s outfit. However, since becoming Oracle she can now wear PJ’s to work.

Most Kick-Ass Moment: Becoming Oracle. A bullet from the Joker simply makes her stronger. She now uses her brain and hacking skills to fight crime. All those male superheroes may go on and on about their fists being a last resort while pummeling the latest crook, but Barbie has fought crime for years without breaking a nail.

Why She Needs Therapy: The death of her mom, I guess, but really her entire life. She is either training or killing bad guys under the “responsible” supervision of her Big Daddy.

Girl Power: She doesn’t have any per say… but you don’t need any when you can wield a butterfly knife with excellent accuracy and kill everyone in a room without missing an episode of Sponge Bob Square Pants.

Combat Boots and Tiaras: Her grungy schoolgirl outfit, straight out of Hot Topic, is the right combo of comfy breath-ability and gullible disguise.

Most Kick-Ass Moment: Her truly mischievous nature shines when she confuses bad guys into believing she is an adorable straight-A student at the wrong place and the wrong time. Nope, she’s at the right place and all the bad guys will soon run out of time.

So, who is the most Kick-Ass girl of all time? You decide. But, if I was walking down a dark alley, I would have to go with Molly. Why? Because I too enjoy a good nap after saving the universe and writing a lengthy column.