As the premiere of the highly anticipated Man of Steel feature film with Henry Cavill draws closer every month (it’s set for June 2013), fans of Clark Kent and his alter ego can get geared up with Superman: Unbound. Coming out on DVD, for download and On Demand May 7, the DC animated feature pits Superman (Matt Bomer) against the formidable Brainiac (John Noble).

Based on the Geoff Johns and Gary Frank’s Superman: Brainiac (2008), Unbound is an adventure that will please adults and kids, though it’s PG -13 rating is well earned thanks to the abundance of blood and guts, both human and alien. Bomer brings a steely quality to the Last Son of Krypton.

“I knew this was a character that people had a lot of preconceived notions about,” he said, and even legendary voice director Andrea Romano (Batman: The Dark Knight Returns) admitted that Superman is always the hardest voice to cast. “He’s who we hope we could be,” Bomer said. “Our best self, the best version of us.”

Bomer rose to the challenge, providing the deep, commanding cadence so often associated with the Man of Steel. He held his own against the great John Noble whose stoic and arrogant tone fit perfectly with Brainiac. The animation is fresh and clean with everyone looking familiar yet new. Superman’s young features do not hint at his maturity, acting paternal toward cousin Kara/Supergirl (Molly Quinn) and protective of (secret) girlfriend Lois Lane (Stana Katic).

Unbound is as much as new chapter for Superman as it is nostalgic. The animation is reminiscent of The Adventures of Superman and like that cartoon we get to see our hero defending Earth using all of his extraordinary powers and just his fists.

The interpretation of Supergirl is especially pleasing. “I wanted to make sure she was strong,” Quinn said, and she is, both physically and emotionally. Too often teenage superheroes can become stereotypes of whiney martyrs but Supergirl proves she deserves to be fighting by her cousin’s side. The same is true for Lois Lane. Katic gives audiences a Lois who is sassy, sarcastic, and real, not just some flighty reporter.

Though the climax was somewhat anticlimactic, the very fitting and satisfying ending more than made up for it. Genuinely funny and thought-provoking, Superman: Unbound is worth your time. Take it from the voice of Superman himself, “There’s no reason not to see it.”

See Superman: Unbound on DVD, On Demand, and for download on May 7 and take a look at pictures of the cast and creators from yesterday’s WonderCon 2013. 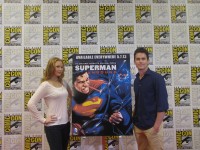 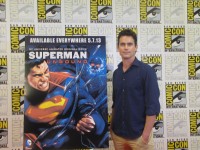 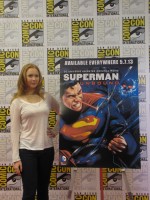 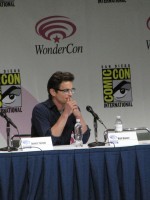 Matt Bomer (Superman) during the panel 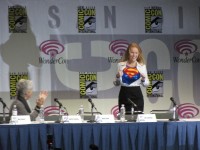 Molly Quinn (Supergirl) showing her superhero pride during the panel. 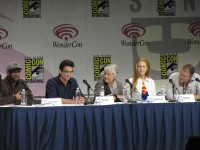 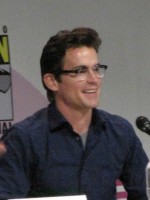 Matt Bomer (Superman) showing off his Clark Kent glasses during the panel. 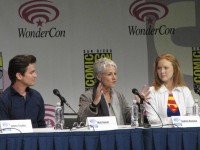