I recently wrote about Loot Crate, the company that is supplying geeks and gamers with a box of swag every month. To find out first hand whether the subscription service lives up to the hype, I got the July crate to review.

Part of the fun of the crate is definitely the mystery. I was nearly giddy with excitement when opening it, like a kid on Christmas morning. The first thing I saw upon unboxing was Star Wars earbuds. Immediately I knew I was in for a good haul. Next came a Thor Pez dispenser and then a Sonic the Hedgehog air freshener, which has a pleasing floral scent to it.

As I progressed, the crate’s theme became clear. Whether to coincide with Geek Week on YouTube (August 4-11) or VidCon 2013 (August 1-3) or because popular web series Video Game High School (VGHS) began its second season on July 26th, this crate was perfectly themed around VGHS. Included was the entire first season of the show on DVD and a set of buttons portraying the different schools (e.g. Adventure and Discovery or Speed and Control).

There are some trinket items as well like stickers and a VGHS pencil. These are freebies you might pick up a convention like Comic-Con but add just a little extra fun to the crate. At the bottom of the box was a special code that, when punched in on lootcrate.com, entered me to win the Mega Crate.

Now I can honestly say that there is not anything in my crate that I would have gone out to purchase on my own. But that is what makes Loot Crate a winner in my eyes. I am excited to pop in Video Game High School and hang my Sonic air freshener in my car. I cannot wait to use my Darth Vader earbuds and proudly display my Thor Pez dispenser on my desk. The pencil may go unused and I have not quite figured out what to do with the buttons or stickers but the other items are more than enough to say I loved my crate.

If you love geek gear and surprises and have the money for the subscription, Loot Crate will not disappoint. 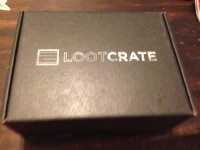 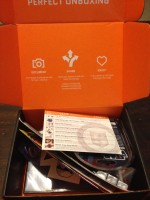 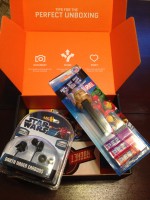 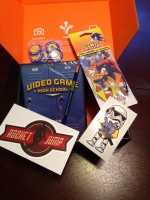 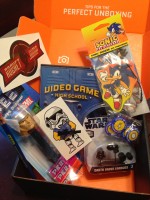