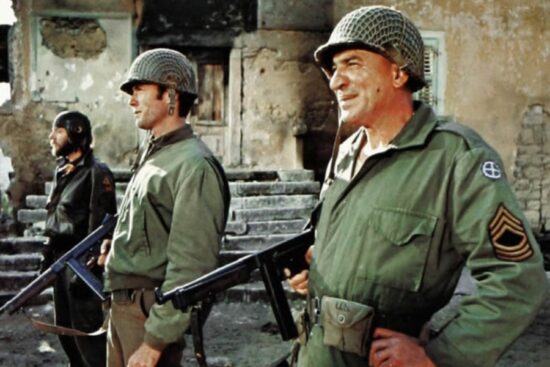 As we did with Western Wednesdays Again, we’re bringing back another favorite feature: War Movie Mondays. And kicking things off is 1970’s Kelly’s Heroes. Written by Douglas Barnett, War Movie Mondays explores a different film in the “war movie” genre each week with him offering his unique take on the film, details about the production and whole lot more.

So, we’re pleased to bring you the first installment of what we’re now calling “War Movie Mondays Again.” Yes, we know, another great title. How do we do it? Talent. Enjoy!

Kelly’s Heroes is a war film that has all the great elements of an old fashion, rousing epic that keeps your attention all the way through. Set in the late summer of 1944 as the allies swept across occupied France, Kelly (played by the ever cool Clint Eastwood) and his squad of screwball infantry men find out that the Germans are holding over sixteen million dollars worth of gold bars in a bank thirty miles behind enemy lines.

Tired of the politics of infantry life and the gross inefficiency of their Captain, Kelly and the rest of the squad run by tough sergeant ‘Big Joe’ (Telly Savalas), cook up a scheme to go behind the lines with three M-4 Sherman tanks to rob the bank. As the movie poster states: “They set out to rob a bank and damn near won a war instead.”

With Kelly’s Heroes, Eastwood began his second collaboration with director Brian G. Hutton, who had directed him a year earlier in the highly successful Where Eagles Dare (1969) — a movie which solidified Eastwood’s status as a major box office star. One thing making Kelly’s Heroes such an interesting film is the fact it was released in 1970, just as the U.S. was beginning to downsize its presence in Vietnam.

Other films such as M*A*S*H, which came out in the same year, mirrored that of the country’s current attitude towards the war in Vietnam and was considered to be escapist entertainment. ‘Oddball’ (Donald Sutherland) graces the screen as World War II’s only hippie who commands the three Shermans who accompany Eastwood’s squad to steal the gold.

Brian G. Hutton directs with style and fluid continuity that shows throughout every frame of the film. The movie highlights the trade Eastwood learned from other collaborations with directors such as Sergio Leone and Don Siegal. These techniques learned on the set, as well as the other films, would apply two years later with Eastwood’s directorial debut Play Misty for Me.

I first saw Kelly’s Heroes as a late night showing on cable nearly twenty years ago and it quickly became one of my favorite films. I have always credited the film as a reason for my love of cinema and especially the history pertaining to World War II.

Much like Tarantino’s Inglorious Basterds scenario which plays around with the notion that an elite hit squad takes down the Third Reich and ends the war, Kelly and his men become heroes to the U.S. high command and General Colt who believe them to be intent on breaking through the lines in order to end the war.

Kelly’s Heroes is a film that falls into many genres. It’s comedic, it’s full of action, and its often poignant, such as the scene where two soldiers are left for dead in a mine field after an attack against a mechanized German patrol. The men don’t want to leave them there but they must push on as to not draw attention to their mission.

My favorite scene in the film is exactly one hour in. As Kelly and the squad are strafed by an American fighter plane and are now forced to walk to their objective, Odd Ball and his men have to find a way to push through the enemy lines in order to link up with Kelly. Odd Ball’s Shermans arrive at a military railway installation and prepare for an attack, a concept that would be used nearly a decade later with Apocalypse Now and the Ride of the Valkyrie theme on the Viet Cong village.

The Shermans emerge from a tunnel blasting country music over a loud speaker, firing their .30 caliber machine guns and 76mm tank cannons. The scene is a well choreographed display of violence, and “Peckinpah” carnage against the German garrison who are totally caught off guard.

When all is done, Odd Ball and his men move on down the railroad tracks to a version of “Working on the railroad” played by banjo. Awesome scene!

Kelly’s Heroes is a fantastic war film I have always ranked as one of my top favs. It’s also one of my favorite Eastwood roles ranking just behind classics such as The Good the Bad and the Ugly and Dirty Harry. It’s well acted, well written and entertaining from start to finish.

Kelly’s Heroes is available on DVD and Blu-ray through Warner Bros./MGM and can also be found on various streaming services.