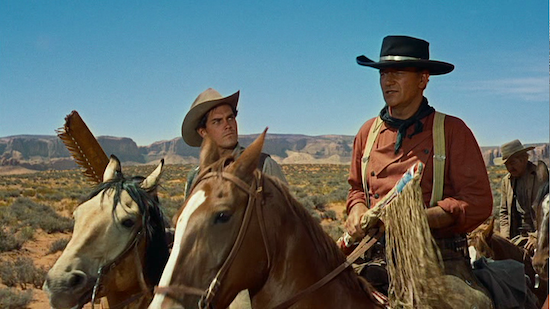 Welcome back to another edition of Western Wednesdays Again. This week we’re highlighting the John Ford classic The Searchers.

I’ve been anxious to revisit The Searchers. I haven’t seen it in years, and it’s the kind of film that’s referenced so often that it practically buries an individual memory.

Am I remembering actual film, or simply George Lucas or Quentin Tarantino’s visual quotation of it? The lines can really blur. So when it popped up online recently, I grabbed the chance to watch it again.

This is a fascinating film, though I’m not sure it’s a particularly enjoyable one. It goes without saying that it’s visually stunning — the sunsets, the famous door frame shots, those endless expanses of Monument Valley, a snowbound herd of buffalo.

You’ve seen The Searchers even if you’ve never actually sat down and watched it.  Every shot has been imitated a dozen times over by other directors in other films, but that doesn’t make them any less stunning.

But I’ve never felt the story was entirely sure of itself. Is Ford criticizing the treatment of Native Americans and the racist opinions of his characters? Or does the film uphold them by its uneasy worship of John Wayne’s Ethan Edwards, and its laughter over Marty Pawley’s abuse of his “wife”? Is it saying that violence merely begets more violence?

Is it begging for civilization and law?  There’s no eye-for-an-eye code here — as brutal as that sounds, that ancient law actually puts a limit on revenge.  But here soldiers wipe out entire Comanche camps for the actions of a few, and Comanche chief Scar collects numerous scalps to avenge the loss of his sons.

Even Ethan has no limit on personal justice. Jeffery Hunter’s Marty Pawley and Olive Carey’s Mrs. Jorgensen seem to feel there ought to be a limit.

In fact, one of the things I find most fascinating about Westerns is that they’re closer in style to medieval literature (my academic specialty!) than any other genre.  Westerns glorify a quick draw as much as the Anglo-Saxons valued a good warrior, and yet both cultures are troubled with the fact that killing never really solves anything. You’ll often hear Western characters say “If you kill him, his brothers will come after you!”

Beowulf is full of bitter speeches about the merciless nature of vengeance. In the Anglo-Saxon world, they tried to solve it with diplomatic marriages. By the Wild West, they just hope the sheriff shows up in time — or as in Searchers, that someone can restrain Ethan when the bloodlust takes over.

Ford’s films are uneasy about spilled blood. He wants to get the audience going, but he’s not sure where it all should end.

But it’s to the film’s credit that it lends itself to such questions, and is willing to show characters who aren’t particularly nice people. Ethan Edwards is one of the most terrifyingly single-minded characters ever put on film. He’s completely unlikeable, and again, the film seems uncertain as to its own feelings about him.

It doesn’t condone his appalling treatment of Debbie, and yet only Marty openly defies him. Everyone else agrees she deserves to die. Did Ford?

Yet he’s impossibly compelling and strangely sympathetic. You may hate what he’s become — and I do — but horrific circumstances have shaped him. He’s the extreme product of his bloody times. Much has been made of the reasons for his relentless hunt, but I think it’s relatively simple and unromantic.

Ethan is a man who needs a cause. He’s a Confederate, he fought under Emperor Maximillian in Mexico, and now he’s determined to wipe out the Comanche. He’s thirsting for action long before Debbie is kidnapped.

When he walks out that door in the end, you know he’ll find another quest, and continue riding until he can’t stay in the saddle any longer. But this is the rare film that sells it as a tragedy instead of something admirable.

The Searchers is available on various streaming services, as well as Blu-ray. Watch it. And if you do, let us know what you think.