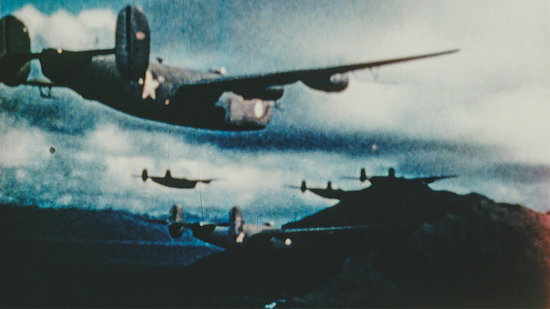 It’s time for another installment of Revisiting John Huston. This time around we’re taking a look at Huston’s war documentary Report from the Aleutians.

Before I even started considering a retrospective on Huston, I still wanted to watch all his films—at first the big ones, then go on to the ones that looked interesting, after that, eh, maybe the obscure-but-still-kinda-uh-well-liked ones?

Then everything—if I could stand it—beyond. Either way, be it as casual viewer or retrospective writer on assignment, Huston’s WWII propaganda films weren’t something I was particularly looking forward to.

It would be a neat curiosity, since the bulk of Huston’s work was based on novels, and this would be one of the few (perhaps only? I haven’t gotten that far ahead in my research) Huston works not based on existing material. Nevertheless, my first glimpse of Report from the Aleutians (1943)’ first five or so minutes all but confirmed my fears—I figured it’d be dated, being all 70+ years old, WWII-ish, and well, topical really.

It dealt with something that happened a long time ago and whose importance would be all but lost on my generation and probably my parents’ as well. And even if you like documentaries, at first glance it looks like not much more than simple propaganda—which really was my greatest fear with all three.

I find propaganda fascinating (if you don’t, check out Disney’s war cartoons—ever wanted to see Donald Duck as a Nazi?), but when I’m watching the film for the sole purpose of better understanding Huston, I just got this image of the US Propaganda Department breathing down his neck and telling him everything he can and can’t talk about—which is to say not the ideal collection of films to give insight to the man.

But after I made it through the first 10 or so minutes, I was pretty surprised with how much I….yes…enjoyed it. This is Huston talking about the Aleutian Islands and their strategic importance to the American war effort by being in close proximity to the Japanese-occupied island of Kiska—an island whose positioning grants them crucial superiority in the Pacific theatre.

The fact that I’m able to remember that massive chunk of exposition when I have the memory of a goldfish (“Hey is that a new castle?” “Check out that new castle!” “Whoa! There’s a new diver in the castle—and there’s a new castle! And WHOA! IT HAS A DIVER!”) is a testament to Huston’s skill.

In fact, this may be one his most interesting films in terms of technique alone, because, while everyone talks about the pressures of the studio making demands, this was the freakin’ United States Government during wartime! In Hollywood you can at least gripe for the rest of your life at how the studio mangled your film, but if you don’t deliver here, you can get thrown in prison or…what the Hell, hung without trial.

By most accounts Huston’s two other war documentaries didn’t make him many friends among the higher-ups, but Report, for the most part, remained drama-free, save for a few objections regarding the soldiers’ smoking.

Report opens, like I said, slowly, with a map of the Aleutians in relation to the U.S., and a summation of the Japanese forces near Midway and Dutch Harbor. The narration, voiced by Huston himself (and sounding like a mix between George C. Scott and Old Man Winter), is thick on details, but so long as you know that the American forces are camped at Adak Island and their job is bombing the Hell out of the Japanese-controlled island of Kiska, you’ll be fine.

Once the dry opening is finished, Huston gets right in to describing life on Adak, which is little more than the downtime between bombing missions. We see the men work, sleep, pray, and light up during mail call as Huston coos, “To the men of Adak, a letter from home is worth more than their monthly pay.”

On the surface, it’s almost idyllic, and you can all but see the censor nodding in approval when the narrator reminds us that there’s “nothing to drink [beat] not even a coke; no women; cigarettes and candy bars are rationed.” And he must have stopped watching, completely satisfied, when he heard the line, “If you wish to see their [the men who died at the Battle of Dutch Harbor] monument, people of America, look around you.”

But Huston sneaks in some of the gloomier aspects of soldier life. Certain scenes are clearly staged, such as when the day’s bombing is being planned, but a shot of the crew in their tents at night, sullen and alone, carries an undercurrent of squalor, magnified by the dull greens, blues, and grays of the cinematography. Huston apparently went out of his way to emphasize the tedium of Adak; Wikipedia mentions that Army authorities frowned on shots of the soldiers smoking and digging latrines—touches that give you an idea of the harsh reality behind the façade of duty, honor, and piety.

Huston even manages to add a dash of humor when, describing the nature of piloting a bomber, intones, with utter seriousness, that “a monument should be erected to those high school speed demons, for it is from their ranks that our pilots are chosen.”

From there, the second half of the documentary begins, where we see an actual bombing mission over Kiska. We meet some of the men and hear how many missions they’ve flown, sometimes in the teens, more frequently in the twenties, and several well over thirty. To add some context, we’re informed that bomber pilots are not like a regular fighter pilot, as fighters are free to cause the most havoc they can while the bomber must be more controlled, for the lives of more than just themselves are at stake.

It’s respectful and informative, but after meeting the men, hearing their names, and experiencing the monotony of their lives first-hand, it evokes a feeling more of pity than admiration. The men risk their lives each day, yes, but nowhere does it seem to accomplish anything. The Japanese still occupy Kiska and life on Adak goes on.

The flight over to Kiska is monotonous, and we see the men wearing the same frowns as they did the night before in their tents. Huston makes a special point of mentioning that the men play stud poker to relieve the boredom. Think about that: Can you imagine any other documentarian, working for the United States Army during the Great World War II, taking the time to film a scene like this? It’s doubly effective in again emphasizing the pilots’ dreary lives but also building the tension before the bomb run.

And it’s not stock footage either—Huston and his crew were actually on the planes, risking their lives as well. If we didn’t realize it from the footage inside the plane, the point’s driven home when a shot rocks the cameraman off his feet and we stare into blackness.

When the final run on Kiska arrives, Huston’s voice becomes faster—we hear the squadron leader declare over the radio that the mission’s not over until he gives the word, and we’re reminded that each bomber’s objective is to hit the target, not avoid the anti-aircraft guns.

The camera focuses intensely on each man in the plane—from the gunner to the pilot, and even the bombs dropping—and exploding their target. From thousands off feet above, we see little sparks pepper the Kiska base as the narration takes a rest—Huston at least was not willing to mention that each of those little sparks represented several “Jap” lives.

I have a feeling he would have, but that’s where the censor would draw the line. All we’re given is the final shot of smoke from the burning hangers now drifting off, dissipating into the sky, as the pilots fly back to base, ready like Sisyphus to do the same tomorrow.

It’s an interesting documentary if for nothing else the realism. The word “propaganda” should immediately raise some suspicions, but (despite the deliberate omission of the “Japs” in anything but passing mention) Report portrays as well-rounded a perspective on actual Army life as seems possible. Yes, the narrative at times can get overwhelmed in admiration, but it never devolves into saccharine fawning.

There’s an air of respect that elevates the film to something above propaganda—a desire to express how the soldiers, rather than the War Board, feel, which is why, 70-some years later, it still holds powerfully together, long after the pilots pushed the rock up for the final time.

The entire documentary can be viewed on Netflix.