Revisiting John Huston: The Battle of San Pietro and Let There Be Light 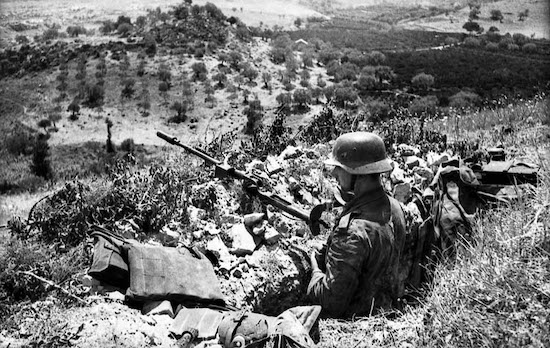 It’s time for another edition of Revisiting John Huston. This time we’re picking up with two more of his WWII documentaries: 1945’s The Battle of San Pietro and 1946’s Let There Be Light. I mentioned last time that Report from the Aleutians came under some scrutiny from the Army, but these two were lucky to have seen the light of day (pun kind of, eh, intended).

I recently went through John Huston’s autobiography An Open Book, which provides a lot of details regarding Huston’s troubles with Army censors while making all three of these films, and while I’m going to focus on the films themselves, the stories behind them are almost as compelling.

San Pietro was controversial for its depiction of war, and it was only through the intervention of General George Marshall, who said it’d make a good training film, that it was shown. Let There Be Light wasn’t so lucky.

The Battle of San Pietro depicts the eponymous battle between Allied Forces and the Italian Royal Army and Germany. But the actual battle is not the main focus, just as the Aleutians were not the main focus of Report from the Aleutians or the Mason General Hospital in Let There Be Light is the main focus, as we’ll see. In all three, Huston uses his setting to address a larger theme—the daily life of soldiers; the brutality of battle; the psychological consequences of war.

Huston once said that he’d be surprised if anyone could outright identify whether they were watching a John Huston movie—that is, his style and subject matter is so diverse that very few common threads run through them, at least not enough to give their director away. That seems about right, because the man who made San Pietro seems to have little in common with the man who made Moulin Rouge! or The Life and Times of Judge Roy Bean or Annie (yes, that Annie). Even back-to-back, San Pietro doesn’t share much with Aleutians, the film that immediately preceded it, was also a war documentary, and depicts actual combat.

For one, Aleutians is in color whereas San Pietro is black and white. Aleutians looks more like original footage whereas many shots in San Pietro seem like stock. Unlike Aleutians, we’re not introduced to the soldiers in San Pietro, nor do we hear them speak. The only sound is the fire of the guns, and the report of artillery…and Huston’s voice.

His narration is more reserved here. More solemn. There’s none of the humor from Aleutians. The music is also more reserved. Nothing light or triumphant, rather it’s meant to convey an unrelenting sense of urgency and menace. The only similarity they share is an unflinching relentlessness to achieve reality on film—no matter how dark, bloody, nasty, or cruel it may be.

This is ground combat, and Huston’s not shy about filming the grittiness. If there is a common thread throughout all his work, I think it’s a fearlessness to go places others wouldn’t. And an honesty. To be fair, there’s a lot of melodrama in Huston, but it’s seldom that his films feel condescending or that he ever doesn’t believe or know what he’s doing or talking about. Reading his autobiography, you see that Huston always seems to be the hero—the best fighter, the best writer, the best lover—and yet, he never comes off as pompous or egotistical.

I believe he actually did go head to head with Errol Flynn for over an hour—and won the fight; I believe H.L. Mencken did tell him to quit making movies and write a great novel; I believe he did break his friend’s bed making love. He’ll give credit to those who deserve it, and speak frankly about those who didn’t. He’ll admit his own shortcomings, too. Honesty and a fearlessness to tell the truth.

He’s not afraid to show the heavy casualties of the first assault. We see a man shot dead, a corpse, a collection of the dead, and, finally, the bodies of the dying and wounded, wrapped up in bags.

The camera shakes, shifts in and out of focus, and at one point loses its balance altogether, spiraling up toward the trees, as though the cameraman himself has just been shot.

During combat, he makes a point of never showing the soldiers’ faces. Their backs are almost always to us when we see them fire a rifle, lob a grenade, or charge a hill, only to be mowed down by enemy guns. When we do see their faces, it’s after the battle, and it’s the faces of the dead. This is how I imagine combat looks. There’s few, if any, aerial shots.

The camera keeps at eye level, putting the viewer right in the thick of it, but when the town of San Pietro is finally taken, the victors are shot with the camera looking up. The shot makes a point—to show the soldiers as heroes, but after their grueling battle, it’s earned.

When they enter the town, bare-breasted mothers suckling their young. Other women carry a coffin on their heads. The only personalities we see are in the children rescued. A trio of three smiling kids cheering through the debris. A girl tending to her infant brother, pausing for a moment to glance up at the camera with twinkling eyes. A malnourished boy with tiny legs and a large head, whose broken-down gait and avoidance of the camera announces his own personal losses. A chorus underscores these scenes, but it doesn’t feel manipulative: That was the feeling, and Huston captured it.

Perhaps the darkest of Huston’s war documentaries, Let There Be Light is a stark and frank look into the lives of war veterans suffering from mental illness. Filmed at Mason General Hospital in Long Island, it chronicles a wide spectrum of psychologically disturbed patients, their psychiatric treatments, and eventual recovery. Huston chose that location because it was then the largest such center in the East and its officers, doctors, and even patients were willing.

Students of psychiatry may be interested in it as an expose of outdated techniques (Huston makes a point of mentioning in his autobiography that he and his crew shot a patient undergoing shock therapy, which “was then much more severe than it is now. The patient used to arch his body so violently that five people were needed to hold him so he wouldn’t break his back,” knowing full well that he couldn’t use it in the final cut of the film), but Huston’s much more interested in the personal than scientific. He wants to show their suffering.

Although he received full consent to film from all the patients (or their guardians), none of the patients are ever named. It’s probably for the best, because they’re so far from the people their friends and family knew that it’d be useless to identify them with a name. Instead, we recognize them for their suffering, such as the young soldier who, despite being in perfect physical health, has convinced himself that he cannot walk. Or the 30-some man who cannot bring himself to pronounce certain sounds—we learn later, when the man is placed under hypnosis, that the reason is because he associates those sounds with gunfire.

Their anonymity also serves the dual purpose of making each patient a representative of sorts for others suffering from similar neuroses. Give a name, and you isolate that illness with that man alone; leave him anonymous and it could be anyone—and indeed more than just that one.

Huston says he found Mason General “unsettling,” among other things, noting that one in ten of the patients were psychotics, and the film ends on a very unconvincingly happy note as each of the cured patients play ball as the scene flashes back to each of their maladies—including the man who couldn’t walk, now stealing third base.

I don’t know if Huston added this to get the film passed by the censors (which refused to release the film for 30 years), but it’s out of sync with the rest of the film. Directors have to make sacrifices, and I suspect this was one of them. (Not to say that Huston didn’t respect the doctors of Mason General, because he did, but the pages in his autobiography mention little about the patients being cured.)

For the most part, though, Let There Be Light is a deeply moving documentary on the psychological trauma of war. None of the footage was rehearsed or reenacted–everyone on screen is saying what they really said and doing what they really did, which is good to keep in mind while watching because you’ll often find yourself skeptical that this is really happening. For my own self, the most unsettling moment comes early in the film, when a black soldier comes in for an interview.

He addresses the doctor accordingly and with such confidence that he seems completely out of place among his peers. But as he tells his story of getting a photograph of his sweetheart, the confidence is gradually stripped away, tears begin to glaze his cheeks and his voice wavers—he apologizes, but the doctor tells him to continue—he does, but gets only a sentence or two further until this man, who moments before had the poise of a granite statue, collapses wailing.