This is part two of this week’s Pull List, check out yesterday’s reviews here. 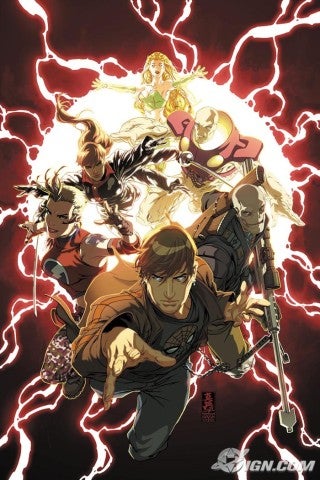 Under the cover headline “They’re exactly what you think”  stands a team of unknowns in the same pose as the Young Avengers on their first cover. In the opening pages the reader is introduced to this new cast of characters who introduce themselves to a group of liquor store robbers as the “Young Avengers”. The rag-tag group is made up of Coat of Arms (sword wielding artist who had brought the team together), Enchantress (not the classic Thor villain, but with similar powers), Egghead (a robot), Big Zero (a size changer with a bad attitude), Executioner (a weapons expert) and Melter (the team leader whose name is fairly self explanatory for his powers).

Originally announced as Norman Osborn’s own team of Young Avengers, this issue shows that the team actually has no affiliation with the former Green Goblin but instead came together in an effort to be heroes similar to the way the original Young Avengers had done. Their methods however quickly come into question as their “success” isn’t gained in the way any hero would have done.  This brings about what looks to be the theme of the issue, and hopefully the rest of the series, of “what makes a hero a hero?” Seen in actions of the characters, flashbacks and conversation between Melter and Coat of Arms, this seemingly simple question is one that is actually very hard to answer.  Even Melter, the one who is so in tuned with what his idea of what makes a hero and his desire to be one must question his own place on the team as the issue plays out.

Artist Mark Brooks does a fantastic job on the issue that help let up on the dark undertones of the series with an almost cartoon-like appearance as had been seen in many issues of Avengers: The Initiative. His facials for the characters are great. Paul Cornell helps by quickly defining the personalities of these characters which come across as very different from how the original Young Avengers were introduced. Between the dark past hinted at for the Executioner or the subtle racism of Big Zero, the team seems to be taking a more Punisher-esque route. The one questionable choice of the issue, whether it was made by Cornell or Brooks was to not put Melter in any sort of costume. Being a team that is unregistered, it seemed strange that the leader would wear the same street clothes when patrolling that he would when having coffee. Whether that was a commentary on bucking the system as Coat of Arms seems to want to do, it just seemed off when every other member went in to a slightly different look.

That being said, if a costuming choice is the biggest fault that can be placed on a book, it must be doing a lot of other things right. These kids seem to be enjoying the “Super Hero” lifestyle without really dedicating themselves to being true super heroes since they can’t seem to define what that is in themselves. They try to match what they have looked up to instead of just going on instinct. It will be interesting to see if the team is able to both survive and stay together past the five issues of this miniseries. If it does, hopefully there will be some kind of vehicle to keep these already interesting characters and fan favorite original Young Avengers going on a more regular basis.

If I had grown up with a G.I. Joe story like this, it definitely would have screwed with my view of the world. Gone are any of the campy aspects of the 1980’s cartoon. Instead this book gives a down and dirty subterfuge story that rivals any spy novel or movie. This issue continues the saga of lesser known Joe, Chuckles, as he goes deep under cover with only the mission in mind: to find out who Mr. X is and stop whatever plan he has concocted. Based on the title of the book, the big plan seems to be the formation of Cobra and Mr. X is presumably Cobra Commander. But the great part about this story is that none of this has been confirmed through the course of the book. All Chuckles knows is that he is getting involved with some very bad people and that if he breaks his cover, he’s dead. (Like I said, much darker than the G.I. Joe I grew up watching where people got burned by lasers at worst.)

This issue deals with what ultimately matters to a soldier. His entire time involved in this mission, he has had to make tough choices. He had to shoot at fellow soldiers to get on the wrong side and then once he was there, his choices only became tougher. Chuckles must ask himself, “What’s one life matter compared to thousands?” throughout the course of this story arc. Eventually Chuckles comes to realize that these lives begin to add up. He is still forced to do terrible things for even worse people. While he avoids doing as much of the “dirty” work himself, he is still associated with it until he comes to a do or die event in the concluding pages of the issue.

As his codename suggests, Chuckles as a character was nothing more than a joke originally. Never in the original incarnation did he have to be placed in instances like this. IDW’s reboot of the G.I. Joe franchise has taken a route definitely not expected with this character or the overall tone of the G.I. Joe series as a whole. It’s a brave move to leave behind the “Real American Hero”/”Knowing is half the battle” image ingrained in the minds of so many readers. The fact that this G.I. Joe has grown up with the reader and matured seems fitting though. Many of those who grew up with G.I. Joe have had to deal with a changing world and in the process of maturing, this franchise is once again relevant to the reader instead of remaining a child’s story.

At the New York Comic Con back in February, writer Paul Cornell said that, in this current story arc, “no one would be safe.” This issue proves that Paul wasn’t bluffing. After finally having turned Spitfire to his side, Dracula takes the war to England where it is defended by Captain Britain and his MI13 compatriots. Knowing the fast army they will be facing the Pete Wisdom reaches out across the globe for assistance in his country’s time of need. That comes next is a war, and with that war comes casualties. The amazing thing about this battle compared to that of the Secret Invasion is that if the Skrulls had planned this way, the Invasion may have turned out very differently in the British Isles. Dracula’s military might and planning tie all the way back to his conversation with Doctor Doom in the first issue of the arc and pay off finally in this, four issues later.

Cornell has mastered the personalities of the issue as he helps set the stage for the impending battle. Bunkered down and waiting, the heroes of Britain’s true colors begin to shine with showings of responsibility, feelings of inadequacy and heated arguments. Meanwhile, the confident vampire lord readies his forces with an eerily calm demeanor.  But it is the actions of these characters on the battlefield that standout and surprise the most (unfortunately the explanation of these actions are spoilerific and best left to actually reading it for yourself).  The story goes to places you wouldn’t have expected if you hadn’t been a follower of the series but still even surprises the faithful reader with the harsh and brutal treatment of some of the series beloved characters.

The art of the issue is average, with nothing really standing out above the rest. The style itself doesn’t lend to spectacular detail or epic splash pages. At the same time, there is nothing bad about it either. It just comes across as very run of the mill for presentation. It’s a shame as some of the images like Dracula’s space fairing ship and the death of one of the characters were intended to be memorable shots but instead are lost in the nature of the simplistic art. Overall, this issue gives a strong showing but doesn’t give the strength seen in past issues leaving it lost in a week of much superior books.

Don’t forget to check back every Thursday and Friday for a new edition of John Carle’s Pull List, right here at The Flickcast!