Geeky Girl’s Guide to Summer Movies: Part 3: The Never-Ending Assault of the Ads

Geeky Girl’s Guide to Summer Movies: Part 3: The Never-Ending Assault of the Ads

To all who have survived the month of June by successfully traversing lines of blood-sucking twihards, I congratulate you. You can relax now because the steaming month of July is less about men of iron and teenagers who use SPF 60 and more about whiz kids, dreamers, and spies.

Movie studios may appear to be throwing grenades into your trench, but don’t let the eye-catching blue and orange of the movie posters fool you. These grenades are merely filled with smoke and a good amount of marketing slickness. They will explode in your face only when you yank the pin by paying $12. Then, they will have truly won the battle. Instead of succumbing to the propaganda, arm yourselves wisely with the reviews below.

Those in the know will hold their breath until August when the golden generation of action heroes team up to save the world, kick some ass before kicking the bucket, and get sweaty enough to take off their shirts- giving both men and women some very good reasons for sitting in an air-conditioned multiplex.

It seems air is not the only thing this kid bends as the title was changed from Avatar to the above under the heavy wind currents of Lightstorm. The film takes you on a wild ride alongside an Avatar (not blue) named Aang who must save the world by defeating the evil Fire Lord and ending the destructive war with the Fire Nation. Last time I checked, air only escalates fire. This kid may have better luck texting Aquaman or Namor to the rescue.

Geekiness Factor: Although not based on an anime or a comic book, it does get geeky cred by originating from a highly acclaimed and rated Nickelodeon toon. One might think that this is from far eastern shores, but instead Americans have done what they do best. Take the most stereotypical elements of other cultures, blend them together, and create eastern mysticism with high-flying theatrics and a dash of Mr. Miyagi wisdom.

Screen Steamer: Yeah, I realize this is a kid’s film, but even my 11 year old niece needs a dreamy boy to distract her from the cheesy dialogue. When it came to casting, I guess Zac Efron had his head in the clouds and Justin Bieber was too busy smacking his bubble yum. Oh well, $12 is still a small price to pay for 103 minutes of baby-sitting time.

Great Expectations: I saw a trailer many moons ago when the film was still being called Avatar the Last Airbender: Air Nomad. Quite the mouthful, almost as much as Percy Jackson and the Olympians: The Lightning Thief. I always think titles with colons are trying just a little too hard akin to Miley Cyrus getting her Spears on. I’m not thrilled by the colon, but with a director like M. Night Shyamalan, I can promise you more characterization and less plotlines than a Jerry Bruckheimer film on the open seas- just watch for those plot twists.

Aw, Nicolas Cage. I fondly recall the days when good ole’ Nick was escaping prisons, stealing cars, and leaving Las Vegas. Sadly Nick has fallen upon hard times and must take anything he can get. Kudos to him for his Adam West swagger in Kick-Ass, but here he seems to be phoning it in. I would be up for following him on an international wild goose chase, but not Nicolas teaching a geeky kid the ways of magic. Nick should stick to finding treasure and leave the magic to Zatanna.

Geekiness Factor: Is it just me or do the action heroes past their prime seem to winding up as teachers for the new gen? First Jackie Chan and now Nicolas Cage? Personally, I’d rather see these two duke it out than either one try an teach punk kids in a week what they learned in years, but that’s just me. In terms of a naïve kid being trained to become a confident fighter, I’d rather watch Star Wars or The Karate Kid (yeah even the new version).

Screen Steamer: With a haircut that belongs where Nicolas left it in Con Air, Nick saunters unto the screen as a man of mystery. Too bad that mystery is where Nick’s career has gone. At least we won’t have to see Nick shirtless, unlike Mr. Cruise in Knight and Day who enjoyed every moment of flashing us his 6 pack and toothy grin. His costar is geeky king Jay Baruchel who might be funny but lacks in the leading man department. Aw well, there’s always The Expendables to look forward to.

Great Expectations: I would say spoiler ahead, but pretty much anyone with a brain can imagine that this film will start with an naive young brat getting inadvertently sucked into a world of magic, being taught the tricks of the trade by a sorcerer, and then taking on an evil sorcerer supreme and saving the world with his new skills, all the while spewing cheesy lines and acting surprised. Sorry if I ruined it.

You may say I’m a dreamer. But I’m not the only one. Christopher Nolan is counting on many movie-goers dreaming right along with him. This much talked about trailer during the previews for Iron Man 2 was garnered with ooohs and awwws. Christopher Nolan + Leo DiCaprio = Dark SciFi meets Blond Ambition. As a movie about a secret stealing corporate dream weaver, Leo’s imagination is only as big as Nolan VFX budget will allow…which turns out to be not too shabby.

Geekiness Factor: Christopher Nolan is the new It Man in terms of crafting excellent film experiences that just so happen to feature super heroes and deep visuals that look like part of the world instead of a CGI add-on. Unlike the cheesy adamantinum blades that looked better in the first X-Men than in X-Men Origins: Wolverine, Nolan’s VFX team tends to get better and not worse with each go around.

He begins by following an old recipe for future noir from Blade Runner and Dark City and mixing in hefty amounts of his secret ingredient to create a truly yummy dish. Do androids dream of electric sheep? Nolan may very well have the answer.

Screen Steamer: Although I can’t see the appeal in a lanky towhead like Leo, many gals can, so they will no don’t love the opportunity to see Leo take on a literal approach as the man of their dreams. Pocket person Ellen Page is also in it, and thankfully she is not knocked up. Unfortunately for those with a Y chromosome, she is also dressed in street clothes- a far cry from her days in black leather.

Great Expectations: I expect to see the anti-hero, darker side of Leo on a razor edge thanks to Mr. Nolan. Unlike Prince of Persia, I also expect the CGI to keep you guessing and my imagination to be in overdrive. Most notably, I expect Christopher Nolan to present one, highly formulated perspective and then reveal it to be a twist you should have been smart enough to see coming with the limited information you were given. 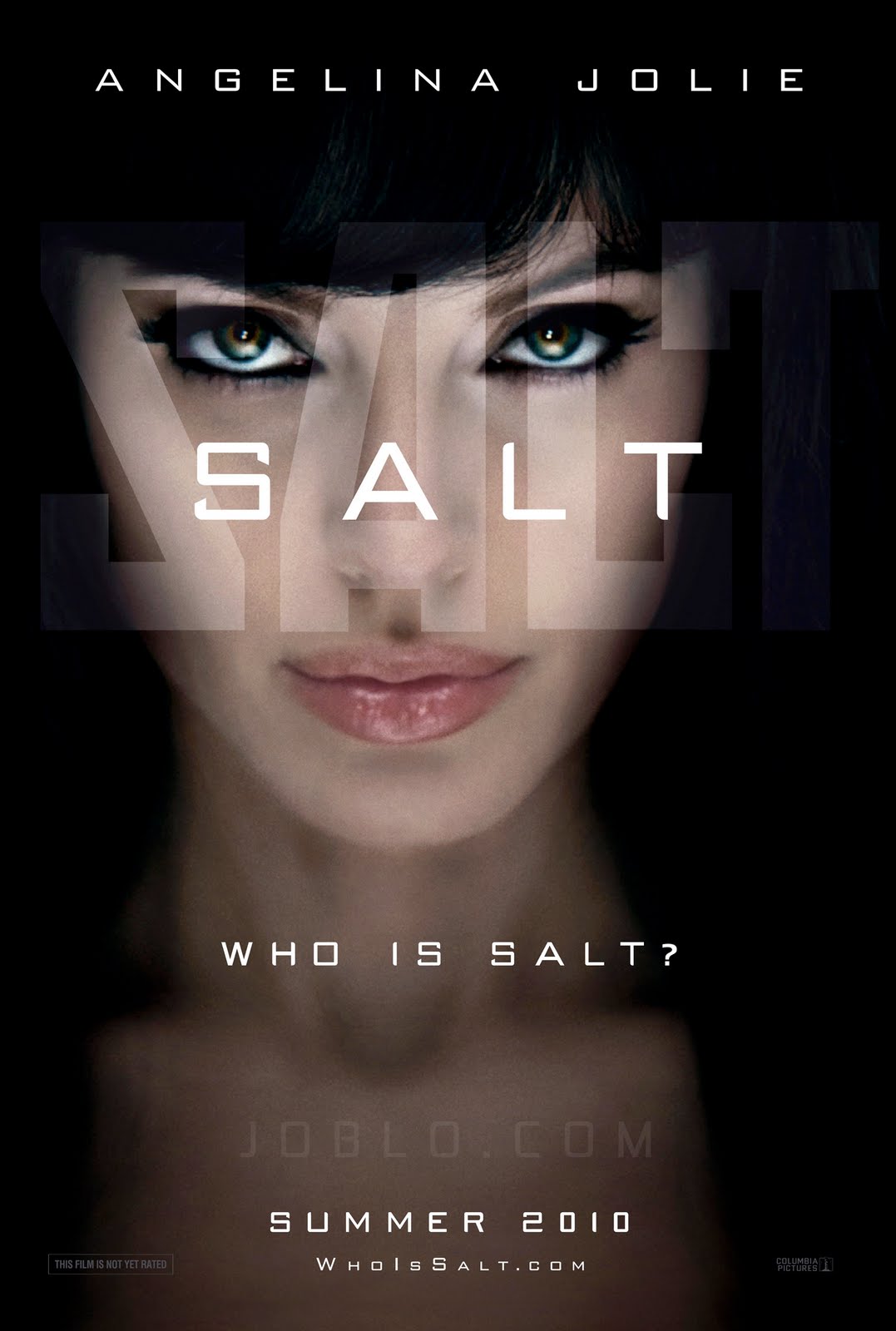 Angelina Jolie sets the bar high. Not only does she provide the United Colors of Benetton with free ads, but with a simple find and replace she can change the lead characters’ name to that of a woman’s and away she goes. No need for a rewrite, just replace saving the wife with saving the husband and Angelina proves that with a little creativity she can break the glass ceiling, all without breaking a nail.

Geekiness Factor: Jane Bourne, Jaime Bond, Evelyn Salt, a rose by any other name… On a particularly boring Sunday, I decided to watch Tomb Raider for what must be the 107th time. For anyone who hasn’t seen this flick, Daniel Craig plays the part of Lara Croft’s bitch, aka her ex who is also a rival tomb raider.

Daniel Craig may look good in a suit and order a mean martini but before women were lining up to be the next Bond Girl, one woman in short-shorts made him a Croft Boy, and that woman was Angelina Jolie. By the way Salt has explosions, Russian spies, and car chases, so it is the epitome of shaken, not stirred geekiness.

Screen Steamer: Angelina Jolie needs to eat a sandwich. Anyone who sees her skeletal frame in profile during the film’s interrogation scene in the trailer will agree. How she finds the time to chase after her United Nations baker’s dozen of kids and scale tall buildings in a single bound all while eating nothing but celery, must be super-human. Thank God what little fat she has remains securely stored in her dewy lips and put to good use as one half of Brangelina.

Great Expectations: I’m expecting Angelina Jolie to do what she does better than her male counterparts: kick ass and take names, all while making 6 inch stilettos look mighty comfy and wearing a wide array of wigs. If I see Angie wearing any other colors other than shades of brown, black, and white, I will be surprised. If the CIA does manage to catch the crafty Salt, they can always torture the information out of her by forcing her to eat carbs.

Ok, so there you have it, AMC’s, Edward’s and Arclight’s favorite blockbuster month of July in a spell-binding, spy chasing rundown. Stay tuned for Geeky Girl’s Guide to Summer Movies: Part 4: Winner Takes All, which will arrive in time for the smoldering month of August.

Until then, I recommend anyone awaiting The Expendables to bind their time with a little Inception, a dash of Salt, and a lot of Call of Duty.