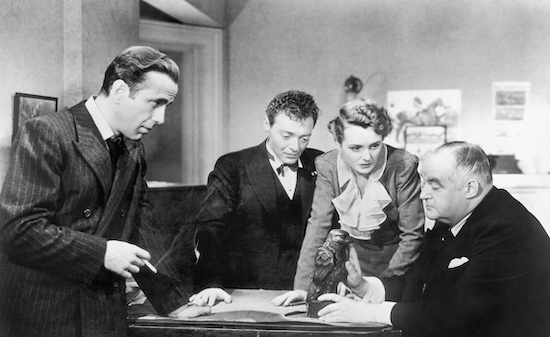 As we’ve done with Western Wednesdays Again, this series of articles discusses the films of one of the greatest directors of all time: John Huston. Originally titled John Huston Thursdays, we’ve changed it up just a bit.

This marks the first in a series of articles looking at the films of John Huston. He is one of the most celebrated filmmakers of the 20th Century and a fascinating man.

It seems sensible to start at the beginning, and an impressive beginning at that, with his first film, 1941’s The Maltese Falcon. So much has been written about this film, so I’ll confine myself to some observations on my most recent rewatching and a few points I haven’t yet seen anyone else touch on.

Perhaps most surprising is that this was Huston’s directorial debut. Prior to Falcon he’d written screenplays, among them High Sierra, the film widely regarded as Bogart’s first big picture.

Knowing that, it’s surprising how established the film is, in that it doesn’t look like a director’s first film. Bogie’s Sam Spade is well crafted and believable, but it’s when the camera pans down to the silhouette of “Spade and Archer” that you know this is no amateur.

There are more than a few transitions like this—the spinning tire of the police car also comes to mind—but it never feels overdone. Many first-time directors would be too eager to show off, often to the detriment of the film, but while Falcon certainly has its share of complicated shots, they’re all made to serve the scene rather than the filmmaker.

So many mysteries inhabit the film, and they all come from the characters. Each one harbors a sordid past that’s only suggested. For all the questions surrounding it, we know much more about the flacon itself than we do the people surrounding it.

Like their stories, the characters’ surnames only hint, never fully reveal: O’Shaughnessy suggests Irish descent; Cairo, of course, far-away Egypt; and the origins of the surname Gutman are anyone’s guess. The only constant is Spade—cold and black as his heart, and yet, his history is perhaps the most mysterious of all.

How do they know each other? Who’s on whose side? Whom can you trust? These threads, Huston understands, are at the heart of Falcon.

Consider the first mention of the falcon: Spade just sits back and listens as Brigid and Cairo talk. Their dealings are merely suggested instead of elaborated, we sense that the falcon is important, but only from how Cairo and Brigid react when they speak of it.

And then we hear of the mysterious Fat Man, evidently the most dangerous player in this game. It’s excellent exposition, yes, providing few details about the Macguffin. But more revealing, and interesting, is the back-and-forth between Cairo and Brigid.

Which brings me to the prologue. Is it necessary? The story’s told again by Gutman later in the film, so it seems redundant, and perhaps the mystery would have been better had we learned about it piece by piece, as Spade does.

But on this watch, I think I figured out why it’s there: If it weren’t, you’d have forgotten all about it by the time the movie actually mentions it (some time around the 45-minute-plus mark). The bird itself isn’t important—all that matters is the people who are willing to lie, steal, and murder for it. Maltese Falcon isn’t about the bird; it’s about the characters.

Which is why the performances are so key. The banter flies by so quickly, much of it is unintelligible. But listen to how it’s delivered. Watch the little tics and movements of each actor. The moment Brigid opens her mouth Astor’s inflection is a bit off. Regardless of what she says, you’re on your guard against this dame…and so is Spade.

Spade’s distrust mirrors our own, and his stability and confidence among a world soaked in lies gravitates us to him. It’s a keen touch that almost warms us up to Falcon’s austere anti-hero. Consider the scene where Spade finally loses his cool with Gutman—it’s almost frightening because if even Spade can break under the pressure, whom can we look to now?

A lesser film would have left the scene at that, but a moment later, as Bogart storms out of the apartment, he looks up and grins, and we breathe a sigh of relief that it was all an act, but it also proves that we still can’t quite trust Spade either, even though he’s more on the level than anyone else.

Of course the falcon itself is not important. As I said, Huston’s far more interested in his characters than a hunk of lead, and that’s likely why The Maltese Falcon remains while so many other detective films fade. And it’s that theme of testing extraordinary people’s limits that Huston would revisit in his 40-plus-years as a filmmaker.

The Maltese Falcon stars Humphrey Bogart, Peter Lorre, Mary Astor and Sydney Greenstreet. It’s written by John Huston, based on the novel by Dashiell Hammett, and directed by Huston. Look for it on the various streaming services.